Home > Marketing > What IT Vendors are Giving Away at Trade Shows

What IT Vendors are Giving Away at Trade Shows 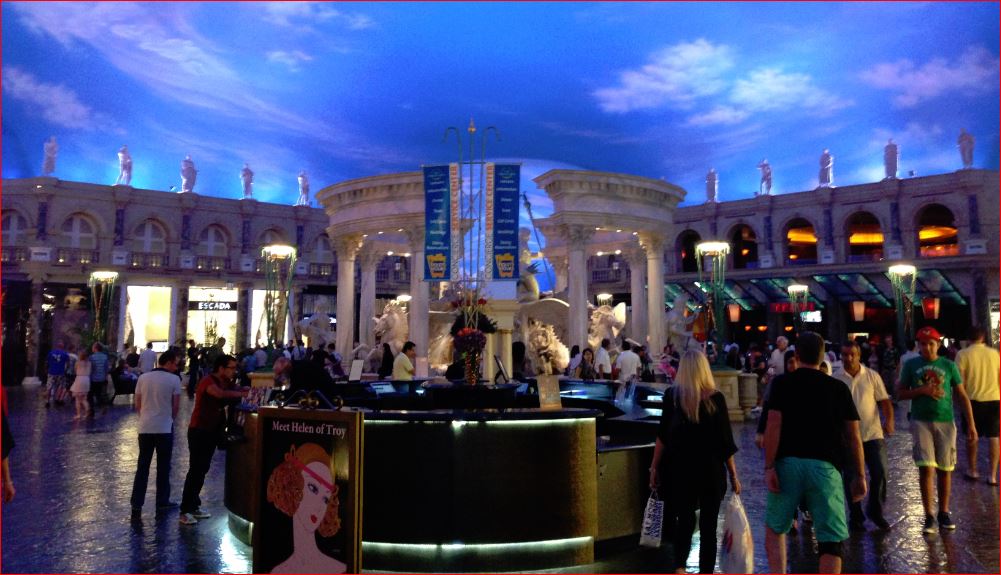 The ILTA Conference was held at Caesar’s Palace, Las Vegas. I didn’t go outside for four days while there — and this photo demonstrates why.

For those that know me, I’ve held a post the last several years that was a PR position for software company that marketed products to other marketing and PR pros; marketing to marketers to say it succinctly.  More than once it’s occurred to me that might in fact make me abnormal — it is not the same — at least in marketing terms.

Fairly recently, I’ve taken a new gig within a software business at LexisNexis and they flew a bunch of us out to ILTA — the International Legal Technology Association — Conference in Las Vegas last week (Update:  38 Posts Summarizing The ILTA Conference).  So amid the hustle that is a PR pro at a conference, I took time to peruse the trade show floor to size up what other sorts of companies were present, talk shop with the other vendors exhibiting and also to see what their marketing looked like. In other words, what are the normal marketers doing?

Here’s what I found:

1. nQueue and the kangaroo.  This had to be one of the most unique — and yet most effective give-aways at the show.  I saw these kangaroos everywhere:  in sessions, in the hallways and hanging out of backpacks. Make no mistake, I picked one up for my daughter too.  If the goal of tchotchkes is to bring traffic to the booth, nQueue did it with these little stuffed animals. 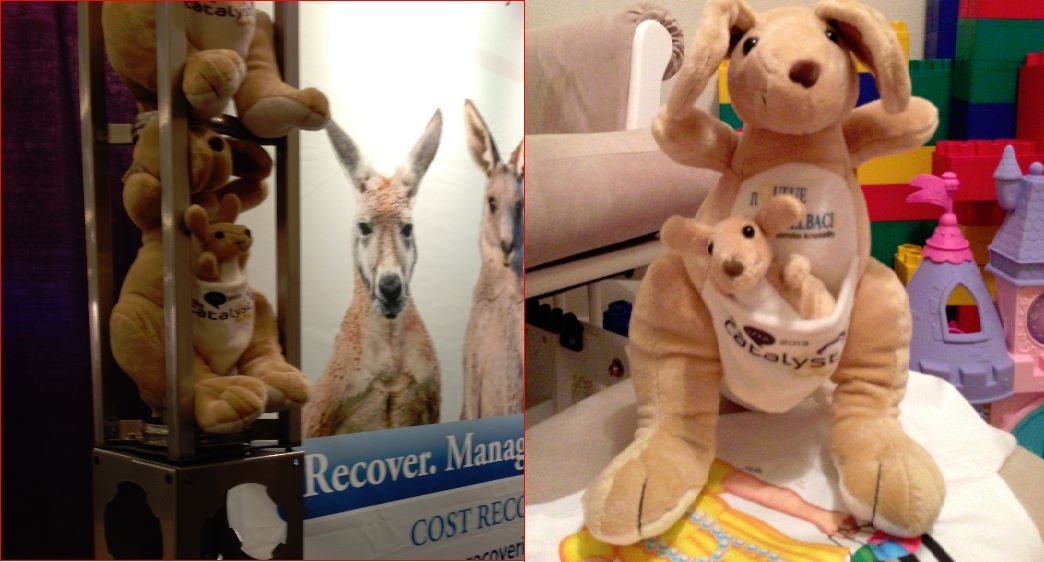 2. Adaptive Solutions gambles. This company was thinking ahead and rolled out a booth theme that jived well with Las Vegas.  As I understand from speaking to the booth staff, the objective was to play cards, win chips, which equated to a chance to unlock the “treasure chest” later in the week.  You can rent anything in Vegas, and that’s how Adaptive Solutions got the card table.  This marketing crew certainly gets points for interaction — and mystery — as a means to bring people back. 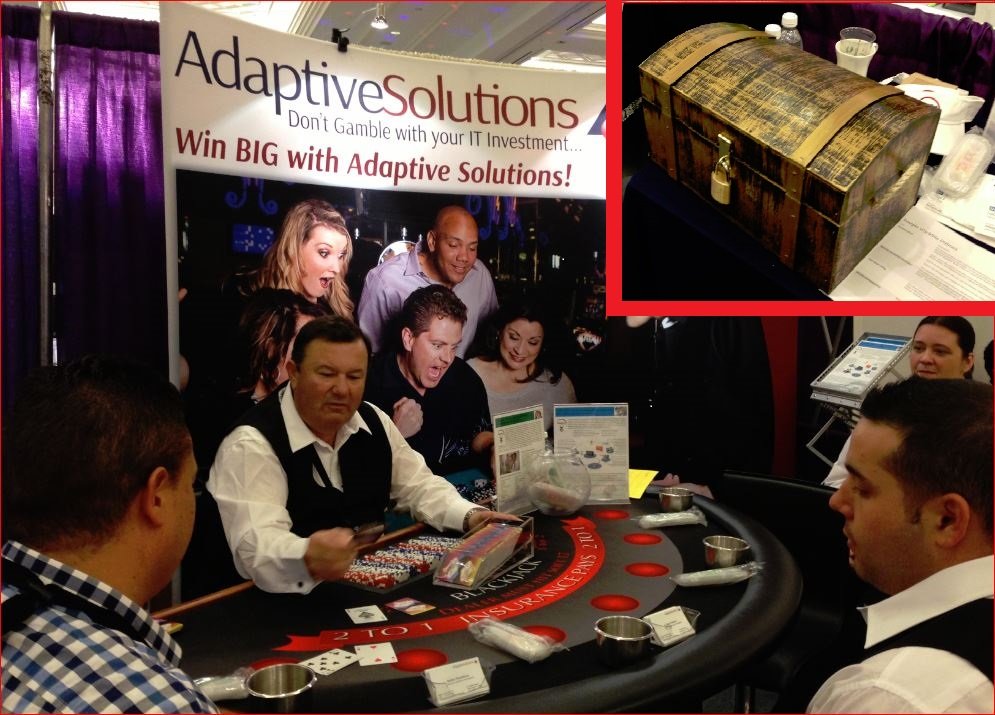 3. Bloomberg:  the booth is the message.  Disclaimer up front: Bloomberg Law has some rival products (but ours are way better).  Even so, I’ve got to give this company props for what was, in my opinion, the best booth at the show.  I mean, it’s Bloomberg!  Their booth simply gave off the aura of Wall Street and a sense of disdain for 32 oz. sodas. But that might have been the terminal giving off the latter vibe!  Their give-away was ear buds.  Points for practical; bonus for sleek. Well done. 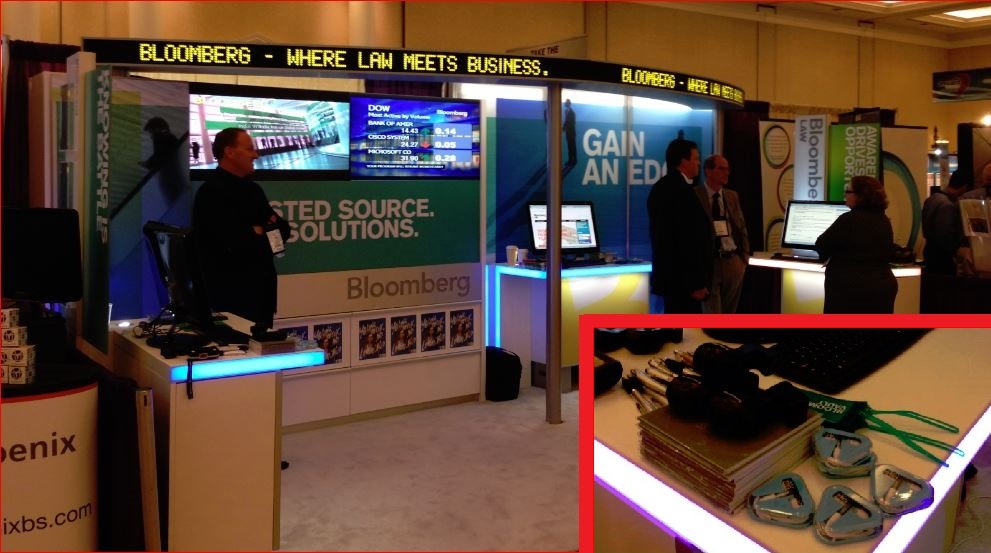 4.  Citrix shares chap stick.  After flying all the way to Las Vegas, I bumped into the @sharefile division of Citrix on the show floor.  We might compete for talent in Raleigh-Durham, but our products are not competitive. I’d like to team with this PR crew to do something interesting in RTP. What do you say folks?  Can we get Google, who just named Cary as it’s digital HQ, on board too?  It just so happened that when I visited Sharefile’s booth, I was in dire need of chap stick and asked if I could have one.  The PR guy gently punched the marketing gal in the arm and said, “See I told you…it’s useful.”  Points for being neighborly and for YOUtility. 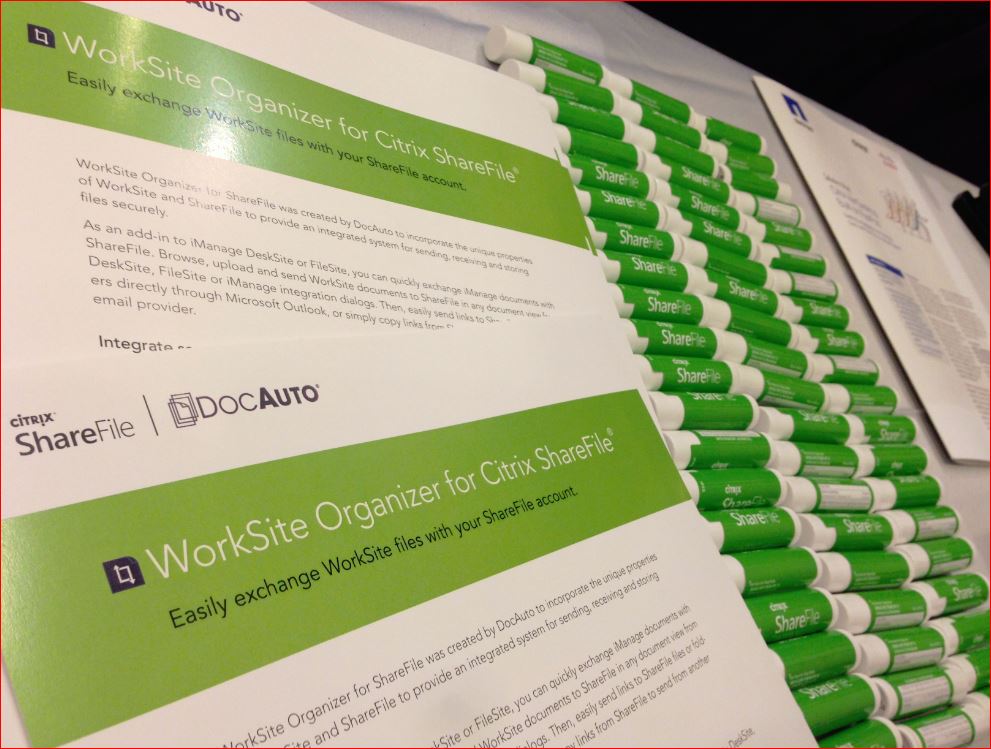 5. ContactEase goes old school with Pez. Betty Boop made and appeance, as did several characters from Marvel Comics in this company’s booth. We’re both in the CRM space, though at quite distinctly different positions, so we traded notes on the competition. Points for retro — and applying generational marketing. 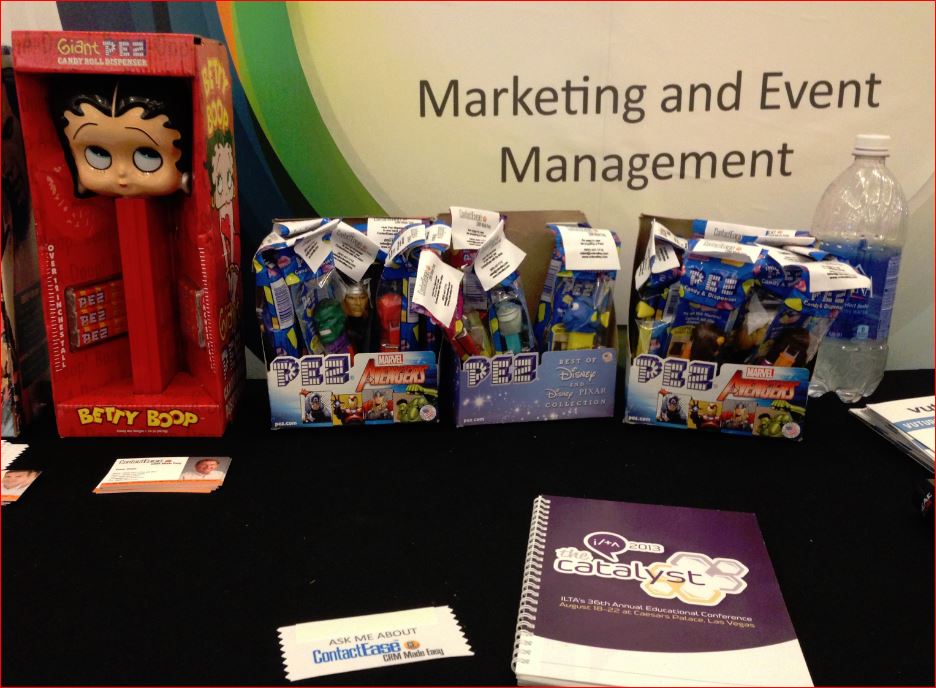 6.  Coretech Leasing and name tapes. I really liked this idea — it’s a play on ego marketing with a twist.  No matter what industry you’re in, the name tags are loaded with bling-bling that ostensibly indicates prominence, experience and accomplishment.  The Army does it too.  Trouble with such bling, is that the minute you walk out the door, you’re back to ground zero.  This outfit played to that with name tags for “Somebody,” “Big Cheese” and “Whatever” available. Points for creativity — and challenging the hierarchy. 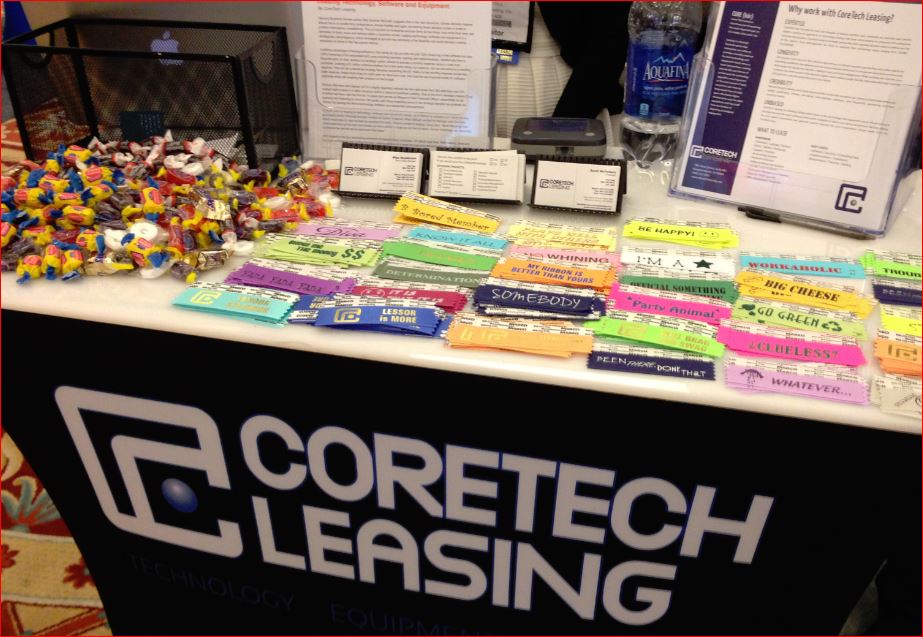 7. Daegis rubber ducks.  I don’t know what it is with rubber ducks this year, but there were a bunch of vendors with give-aways like this; moreover, by my observation, people were lining up for them as they might at an Apple store the night before a new product release.  Rub-a-dub, dub, dub. Points for situational awareness and tapping into the apparent rubber duck trend! 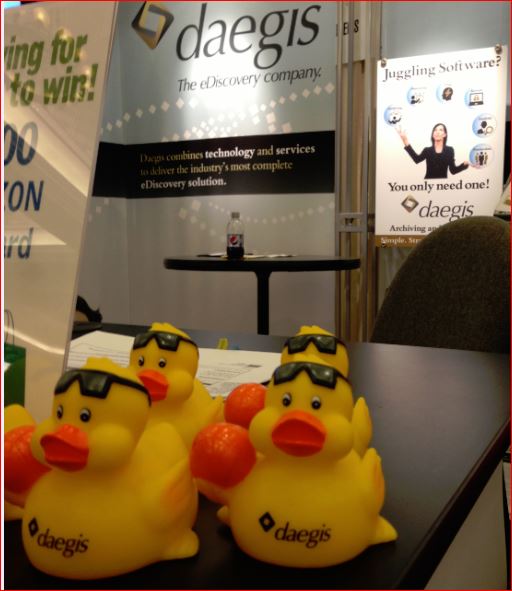 8. DocSolid knows wine.  Who doesn’t like free wine?  Especially in Vegas, where everything is so expensive, there’s a $12 surcharge for waking up in the morning. DocSolid had it right with wine, but there was a catch:  You had to have an appointment and show up for a demo.  The booth staff declined to give out precise metrics, but were upbeat on the results.  Sadly, I did not qualify for free wine.  Straight up:  Points for booze! 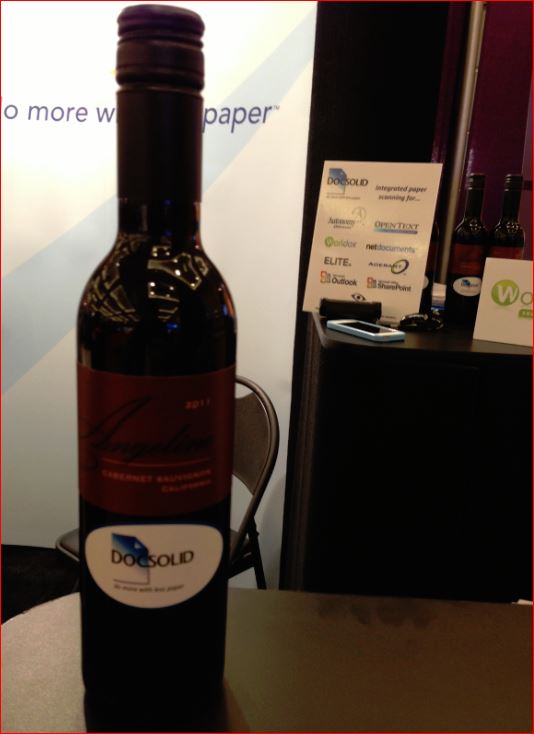 9. Ozzie Osborne:  “Hold up your eFax cigarette re-chargers.”  Although smoking was permitted in the casino (my lungs are still draining), cigarette lighters probably wouldn’t work for most as a give-away.   But these dual chargers?  These are handy. The booth crew offered one, but I’ve already got one in my truck. Still, these folks deserve points for usefulness as well. 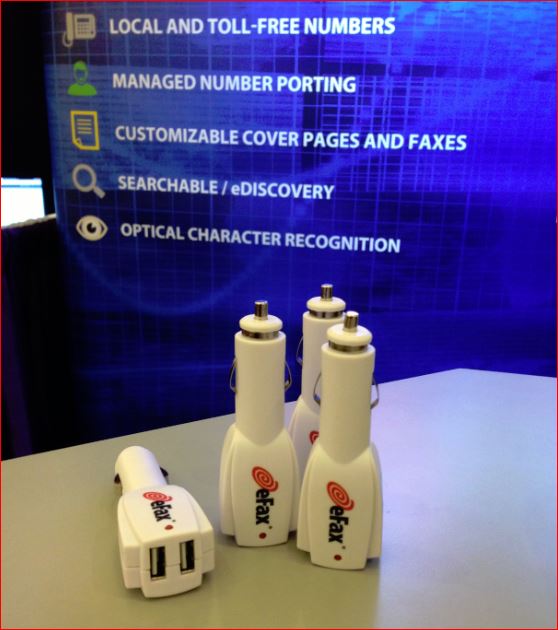 10. FirmEx plays it safe with storage.  There was a time we all ran around picking up thumb drives at trade shows, but we’ve got to credit FirmEx for staying the course: Spend a few minutes on their website and  you’ll understand why this give-away makes sense. I got one too — and I promised those guys it would be filled with skydiving pictures like this one.  Blue skies! 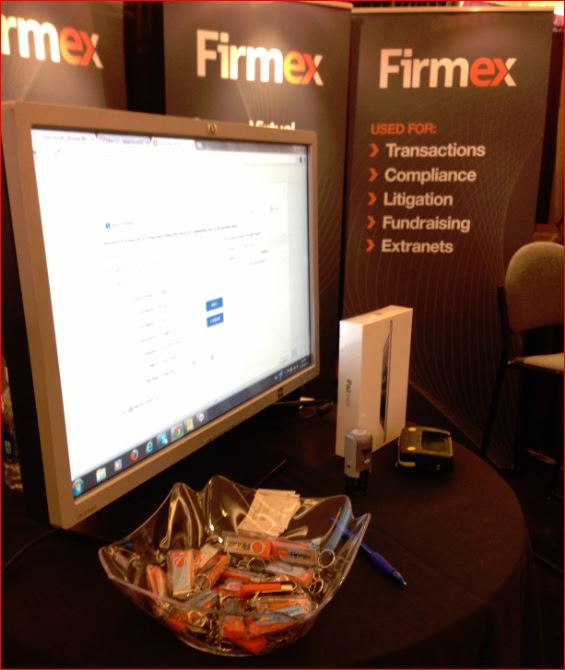 11.  HBR Consulting plays cards.  Vegas has a lot of potential for a trade show, but if you take a quick glance at the vendors listed here, you’ll notice — not to many played up the Vegas theme — my own company included (I’ll do push ups later). HBR Consulting didn’t miss a round though and shuffled out some cards to fit the theme.  Points for thinking ahead. 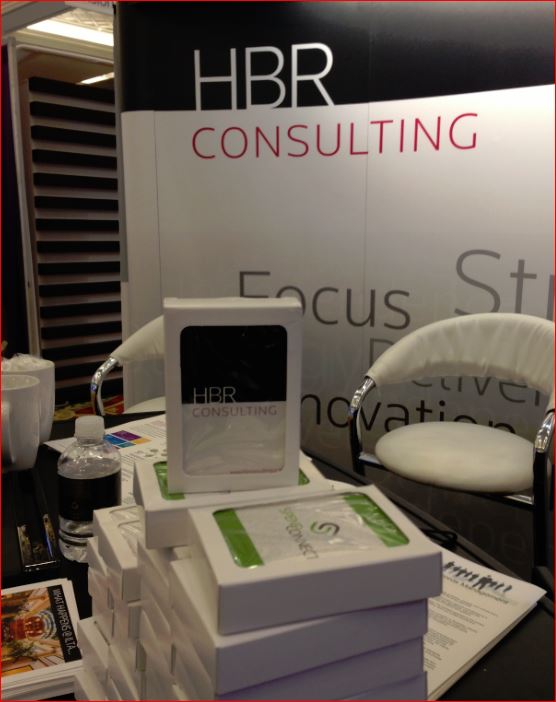 12. Insight Financial Services serves up popcorn. I’ve been to a lot of trade shows in my time but I’ve never seen popcorn. If the path to awareness, leads or sales flows through the belly, then this just might be an effective way for a had trick. 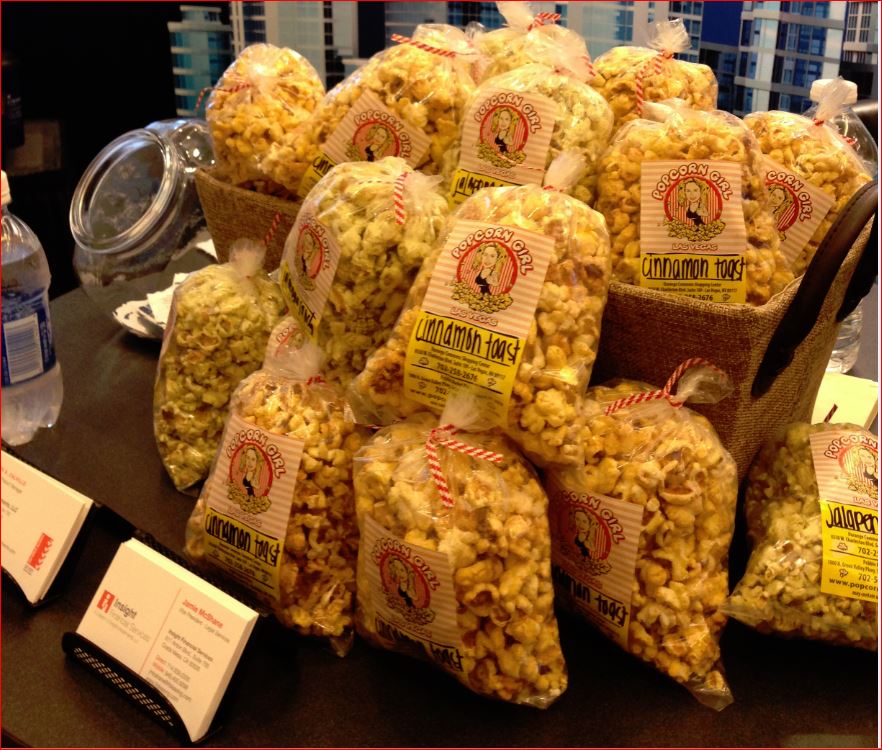 Your turn!  What are some of the better give-aways you’ve seen at trade shows? 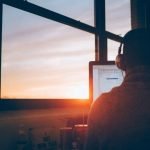 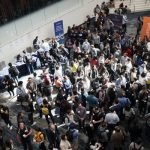 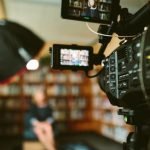 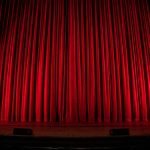 Popcorn and a Movie: A Creative and Integrated B2B Marketing Campaign that Could Work in Any Vertical

by Frank Strong Is it Saturday morning or Sunday morning? Doesn’t matter…I got some great links below.  The second suggestion...