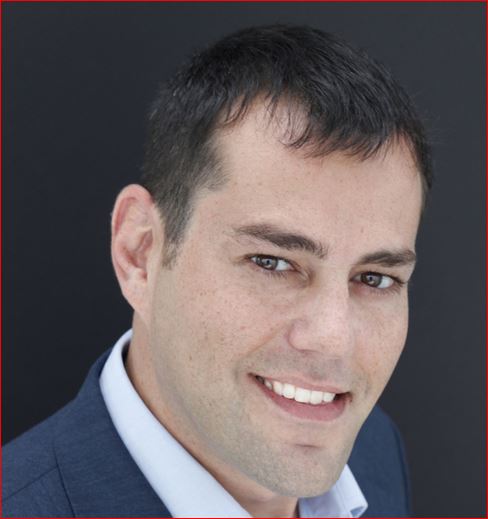 We have to listen carefully to find them, but they are out there.

The silent but brilliant minds.  These people don’t pen PR or marketing blogs, fire off dissenting opinions in comments and aren’t streaming a feed of hot content.  We won’t find them on the speaking circuit, or quoted in the trades, or promoting their latest book. They are discreet, reserved and generally getting it done for their clients with a quiet professionalism.

Ian Lipner, in my view, fits in this category. He’s a throwback of sorts, to the time when PR wasn’t the headline, quote or the story. You won’t find him online championing what’s hot now, but if you’re lucky enough to grab a quiet lunch with him in an undiscovered DC restaurant, listen carefully, because he’s been pretty darn good, by my accounting, at forecasting what’s next, and often, long before its cool.

Ian has both opened and led the DC offices of LEWIS PR, which is a sizable and growing independently owned PR firm. LEWIS PR ranked #39 and #40 in 2011 and 2012 respectively, on Paul Holmes’ list of the 250 firms, which ranks firms by revenue.

Within agency circles, and certainly in Washington, DC, Ian is a familiar name, perhaps even a frenemy of sorts to many.  For corporate PR types, I’m betting he’s the smartest PR pro you’ve never heard about.  He’s genuinely humble, polite and generally, a really decent guy.

I’ve been fortunate to have known Ian since the last time America saw a sock-puppet in a Super Bowl commercial.  In this way, I’ve seen him in multiple roles as a competitor, friend, peer, and twice the lead for my PR agency of record. 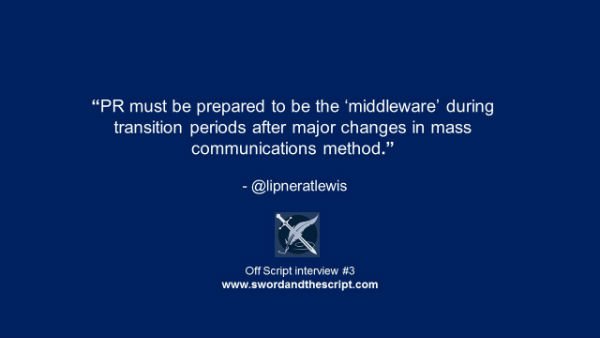 1) You run an office in a major market for a large PR firm, which means you both need to be visible and need to support the visibility of the mother ship. Often this is a delicate balance of business acumen and ego.  How do you do it?

(He responded by reframing the first two questions in one answer; see below).

2) You’re one of the smartest guys on social that I know. In fact, I’d have to credit you with giving me a wake-up call to get with it years ago.  Despite all this…you’re not as active on social media as one might expect.  Why?

“I think these two questions are best taken as one, because they relate to the same core values – visibility vs. trust. The people who I really value at LEWIS value humility.  I love this about our company because this is something that on the surface seems to be at odds with ambition, but most certainly is not.  The people least likely to brag in our company are the most impressive with their sleeves rolled up.

Personal visibility is good for a career, but personal trust is light years better.  Visibility is a commodity product, especially these days, and the breathless celebration of client-less social media “gurus” has underlined that.  Trust, on the other hand, is quieter, but it’s the ultimate conversion – and there’s nothing that scales like it.

Trust arises from an understanding with the client that the outcome is more important to everyone on your team than a role.  I really don’t want people to choose us because they think I talk a good game on Twitter or because I “know people” or because I pepper a marketing conference stage with name drops and profanities.

I want to be chosen because brands appreciate the elegance or cleverness of my team’s campaigns, and I’ll especially love it if they notice the ones where we use new technique as sails to catch the wind.

In particular, social media, is for me, a listening post and not a soapbox.  The sheer volume and redundancy lends itself more to automated trend analysis than for finding a unique point of view.  So I’m always seeking the next channel in which voices aren’t yet hoarse from trying to outshout an echo chamber.  The first people to the new island are always the most interesting, anyway.

I think the best PR pro isn’t the person who shouts loudest, but rather the one who can listen closely enough to find the most brilliant piece of a brand and make that part resonate louder than its duller points. The best managers have the same ability with talent.”

3) I’ve seen PR firms begin to develop products — and product companies begin to offer services.  It’s a melding of two very different business models and resources to make those models work effectively; I haven’t seen any of them take off or really gain traction. Am I wrong?

“In general, PR firms are great at services, which is quite hard to master, so they shouldn’t be in the business of developing products. But we absolutely must be prepared to be the “middleware” during transition periods after major changes in mass communications method. Because PR firms are positioned to understand so many dimensions of our clients’ businesses, we’re usually among the first to figure out the industry-specific business rules that could form the basis for productization.

For example, before competent products were polished by software firms, any PR firm that wasn’t helping its clients make sense of sentiment on Twitter was failing its clients.  Likewise, any firm that can’t currently provide a global measurement of visibility across channels is doing the same thing.  Soon enough, we’ll all subscribe to the same two or three premium measurement products, but in the meantime, we need to offer our clients that “middleware” that helps them make sense of it all, because they don’t want to spend 25% of their execution budget on measurement hours.  We’ll be talking about this again in a couple of years around video production.”

4) Omnicom + Publicis means what for the mid-to-large independent PR firm?

“It means that there will be a great number of formerly fantastic brands and talented executives sidetracked by priorities other than innovation of practice.  It means that there is less real choice in the short term for the savvy PR buyer.  It means there is immense opportunity for brands run by thinkers and doers, to move ahead of brands that are run by bankers.”


5) You do some hiring; what qualities or skills impress you in a candidate and what are they most frequently lacking?

“I look for people who can solve problems without using a web browser, and who like doing it.  I want people who have faith that small efforts will add up to big achievements – marathoners, volunteers, people who throw pennies in wishing wells.  I like people who seem nearly tortured by a passion to create and just need someone to set a vector for them. People who are smart enough to be jaded but unwilling to accept any pre-determined fate.  People who actually choose to be unwaveringly optimistic.  People who make things instead of buying them.

They’re out there, and more today than a few years ago. I especially deeply believe in the people coming out of college right now. They are not like their older siblings of five years ago’s graduating classes – this next group isn’t entitled and focused on curating their personas.  They know it’s going to be harder for them than their parents, and they are dealing with it by trying to experience the world earnestly and creating something that lasts.  Snapchat, not Facebook.  3D printers, not dollar store shoppers.”

Word on the street is that Ian’s DC office just got new digs – we’re still looking for photos! And thank you, Ian!

Somewhere between my junior and senior year of college, money grew real tight and I needed to pick up a...