Home > PR > Delta: How the World’s Worst Brand can also Be the Best

Delta: How the World’s Worst Brand can also Be the Best 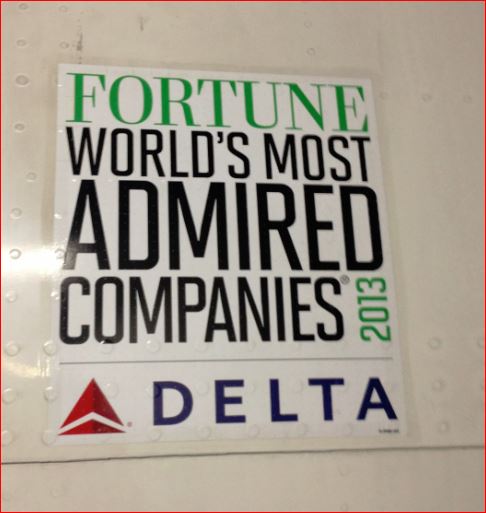 Wait! Didn’t we just see a headline saying this was the worst brand?

The first thing I remember reading last Thursday morning was a passing headline about the most – and least – respected brands.  Delta Airlines was in the headline as being the least respected brand.

Delta even got nailed by their hometown paper. The world is just unkind sometimes.  On the upside, I haven’t seen Scott McCartney write or interview about it.

I scanned the article briefly and moved on; that an airline ranks so poorly isn’t exactly earth shattering news.  Flying today is simply a miserable experience from start to finish and surely the airline has earned its reputation.

The complex industrial confluence of catastrophes that started on 9/11 have been long over, but the airlines have never looked back. Customer service is not a competitive advantage.  Not in the airline industry.

Later that night as I boarded a Delta flight, I couldn’t help but notice the giant sticker posted on the right hand side of the aircraft door (photo nearby) which read “most admired companies.” And this year no less.  That reignited my interest in the story I read earlier.

How can this possibly be?  How can Delta Airlines be the least respected brand on in one study, and among the 100 most admired companies on another?

This survey was conducted by a company called CoreBrand, which has posted its methodology online.  It’s worth pointing out the company has been doing these studies since the 1990s.  Its a long view.

The study also examines two metrics:  familiarity versus favorability. Those are more clear to me — pragmatic even. As the Bloomberg chart nearby indicates, Delta ranks high for “familiarity” and low for “favorability.”  Hence the company’s bottom spot on this list – ranking lower than even the cigarette manufacturer Philip Morris. 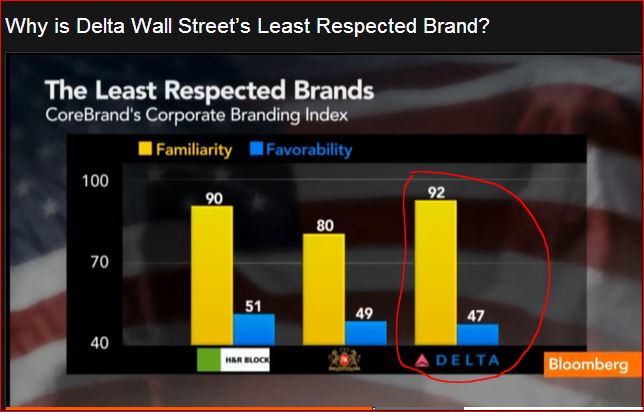 Fortune’s Most Admired Companies survey is also done, which may surprise some, by a market research group called the HayGroup. This firm’s methodology is also available online and this company has also been doing these studies since the 1990s.

This study “surveys top executives and directors from eligible companies, along with financial analysts, to identify the companies that enjoy the strongest reputations within their industries and across industries.” Eligible company is later defined, somewhat nebulously, as “Fortune 1000, Global 500 companies, and other major non-US companies.”

A-ha!  This outfit is merely interviewing the “top executives” from places that include “other major non-US companies” but not necessarily the “decision makers” in the top 20% of U.S. businesses. You see the difference?

Forget the apples and oranges, that’s all frivolous word mincing, it’s the financial nature of the HayGroup/Fortune study that’s the kicker in my mind – something that’s absent from the CoreBrand study.

Delta for example, has seen its stock price (NYSE: DAL) grow rather dramatically from about 8 bucks a share a year ago to about $20 at current trading levels.   With that performance, what financial analyst would rate the company poorly on a survey?

So a customer boarding Delta might see that “most admired” photo on the jet way and wonder how being stuffed into a seat too small for a toddler while handing their credit card to a flight attendant to pay yet another hidden fee is admirable. Wall Street sees that photo and urges the carrier to add another row of seats to the company’s smallest aircraft.

If Mommy says no, ask Daddy

As it always is with surveys, the differences between them often lies in the distinction between who you ask — and how you ask the questions. Given the sometimes irrational mood swings on Wall Street, it may also depend on when you ask.

If you wanted the Pope to light the smoking lamp, would you ask him if it’s okay to pray and smoke – or if it’s okay to smoke and pray? It’s not advisable to do either of those things on a plane anymore, however it’s the line of questioning that answers how one brand can be both the best and worst at something.

Still a pity about those headlines.

What IT Vendors are Giving Away at Trade Shows

by Frank Strong For those that know me, I've held a post the last several years that was a PR...