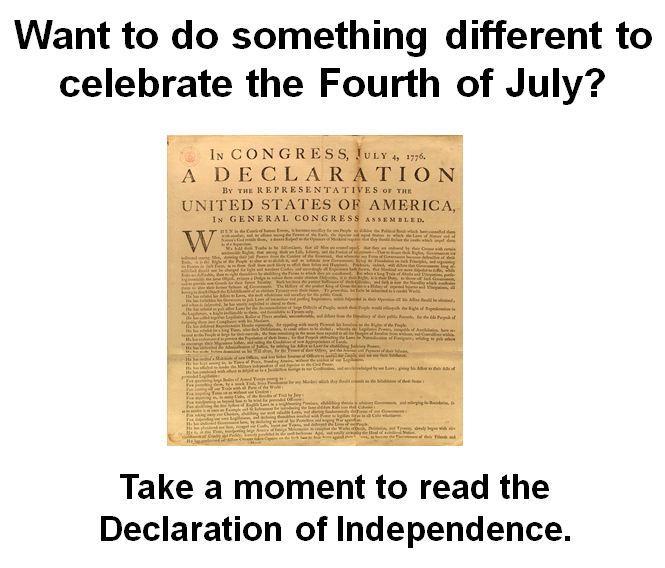 The Declaration of Independence is a little more than 1,300 words — the length of an old-school contributed article.  It contains 56 signatures from representatives of the 13 original colonies.

As a society we often celebrate such holidays with fanfare, but how many of us actually take the time to read the documents at the center of what these holidays signify?

Too few I suppose, despite the fact, the Declaration is fairly short, if not dramatic.  Dramatic in the sense of the story.  Consider this passage:

IN every Stage of these Oppressions we have Petitioned for Redress in the most humble Terms: Our repeated Petitions have been answered only by repeated Injury. A Prince, whose Character is thus marked by every Act which may define a Tyrant, is unfit to be the Ruler of a free People.

Mel Gibson didn’t have a line in Braveheart that could match these words. So to celebrate this Independence Day, I’m proposing we take a moment to read the text.

Take care to look for a credible source — in several of the top results of a Google search for writing this post, I noticed erroneous information.  For example, one document, a text-layout of the document indicated that 15, rather than 13 colonies signed the document.

Here are links the Library of Congress has published.  Here’s a full text of the Declaration of Independence and a photo of the actual document.

"As much hath been said of the advantages of reconciliation which, like an agreeable dream, hath passed away and left...