Home > PR > Why We Can’t Just be PR Pros Anymore

Why We Can’t Just be PR Pros Anymore 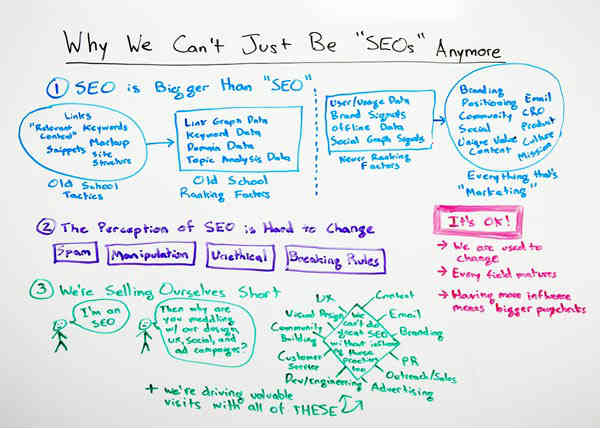 Have you heard of Moz, the company formerly known as SEOMoz?  It’s a marketing vendor that is pretty unique in several respects.

The company is rare among vendors in that it’s genuinely interested in solving marketers’ problems. Moz has great products some of which are free. It’s a vendor that does a lot of good for the marketing community at large.  Finally, Moz is really strategic about its marketing.

It amazes me the company hasn’t long been acquired for a premium price.

Moz has long appealed to SEOs.  In many ways, this has pigeon-holed the company into that corner of the market, and in my opinion, prevents it from penetrating the larger marketing landscape.  This despite the fact its products are useful to a range of marketing functions, including PR.

In May the company pulled off a brilliant rebranding campaign where it dropped the “SEO” part and is now simply known as Moz.  They didn’t just drop the campaign, the company actively laid the groundwork for (at least) several months prior to launching it. They stimulated a heated discussion about the role of SEOs and how this profession needs to stretch beyond what it’s long been known for — linkbuilding, or comment spam as Rand Fishkin, Moz’s CEO put it.

As one of the final steps before pulling the rebranding trigger, the company published a controversial post titled “‘Why We Can’t Just Be SEOs Anymore.”  The post stirred both praise and criticism, including a rebuttal from the renown search marketing writer and editor Danny Sullivan. Sullivan bluntly remarked in the comments, “Yes, you can just be a just an SEO.”

This move by Moz was both bold — because it would surely draw fire — and it was also incredibly savvy — because despite the critics, the company sees the opportunity. In hindsight, it’s easy to see the company was tipping it’s branding hand to constituents. Less than 30 days later it launched both a new brand and a new beta product that fits neatly with its new vision.


SEO and PR have a lot in Common

SEO and PR go together.  Working in silos, as they sadly often do, each function can accomplish a lot.  Working together, these two functions can dominate mindshare and drive a ton of traffic.  For all the reasons these two disciplines should work together, we also have a lot in common:

It many ways it’s agonizing for me to write this because I’ve long been highly critical of those that have dropped their PR title.  Brian Solis, is a prime example.  Though I admire him, the ideas he’s championed, and vision he had about a decade before the rest of PR woke up to the reality of new media,  I couldn’t help but feel a tinge of resentment when he’d jokingly describe himself as a “recovering PR pro.”

Several years ago, I had the opportunity to ask him why he dropped the PR title, and though I don’t remember his exact words, his message has gnawed at the corner of my mind for a long time:  PR doesn’t get you into the boardroom.

Though professional PR associations try vainly to position PR as a corporate adviser, worthy of a CXO title, there’s a lot of truth to Solis’ thinking. SEOs feel the same pain. Sure there are exceptions — I’ve long kept a watchful eye for PR pros that get promoted to CMO or even CEO — but for the most part, this happens infrequently.

This is also true for PR firms vying for C-Suite attention; they tag a senior person on accounts to provide oversight, yet their point of contact always winds up being a mid-level director on the corporate side.   It’s been true my entire career and I’ve been on both sides of the table including at firms big and small. PR rarely gets time with the top leadership and when they do, it’s usually just for pleasantries.

PR gets pigeon-holed into publicity.  And with apologies to my peers that pin their names to that term, it makes me want to shower with a Brillo pad.

It sounds cheap. It feels manipulative. It is tactical. For me, it conjures up images of a late night infomercial with a man in a yellow jacket painted with green dollar signs screaming about “free government money.”  Throw in a Slap Chop at half-price if you order now and pray the IRS doesn’t put you on a BOLO list. 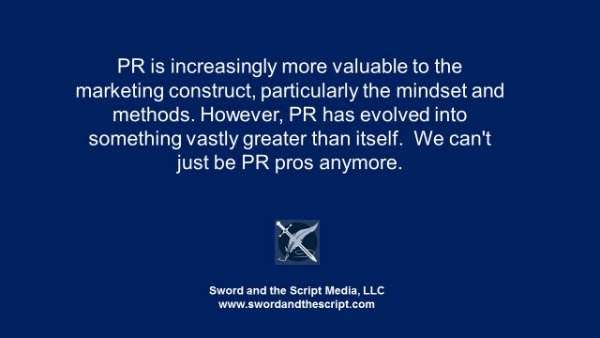 This isn’t a PR Bash, it’s a Call to Action

Despite believing what I’ve just written is true, my view on why we can’t just be PR pros anymore isn’t driven by money, budget or promotional potential.  What’s brought me to the tipping point is the market dynamics and primarily digital marketing, which requires skill sets beyond those in the traditional PR toolkit.

No doubt PR pros are well-suited for social media.  Without question PR pros should embrace content marketing. And while one should never underestimate the power of a well-crafted and timely pitch, we need to move beyond applying text-based skills to a set that is more dynamic…like the web.

We need to apply the same sixth sense for viral appeal and sound news hook to data analysis, graphical visualizations and multimedia, the sort of skill set that requires both an ability to conceive a design — and execute on it in near-real time.  The inertia it takes to roll the marketing train in a new direction defies physics. To lead, we need be in front, we need to be able to show by doing.  The “ah-ha moment” is ever elusive.

More importantly — more and more of the people we want to influence are flocking online, this isn’t a new fact, but the pervasiveness is staggering.  There was a time when the web only happened during certain hours.  Perhaps a few minutes in the morning, a few searches during work and some light reading in the evening.

Today, smartphones have tethered us all willingly to the web at all times and anytime.  Checking, searching, writing, posting during a walk down the hallway, while waiting at the airport, or the minute we have before our next conference call.  We do it, at our own peril and the peril of those around us,  while driving.

Welcome to the click addiction where 12 steps is six pairs of shoes into the future of one-click online shopping, with a recommendation that customers that bought those shoes also bought…

“In one of the strangest ironies of the digital age it seems that the more we isolate ourselves with our electronic toys the more important it is to use them to build relationships with others.”

We literally can’t live without the web anymore.  The digital world is beyond the center of gravity for marketing, it is embedded like the reflex of breathing, in everything we do, whether we are conscious of it or not. 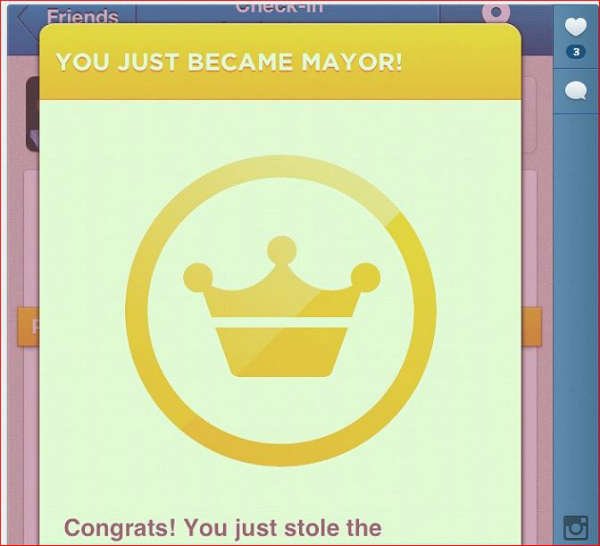 People, Formerly Known as the Audience

Dan Gilmor, who many years ago I knew as a San Jose Mercury reporter covering venture capital, is credited with coining the term “former audience” largely as a result of the new media evolution. On a SpinSucks webinar, Mitch Joel placed this into context (a paraphrase):

“The best discussions are often in the comments.  The paradigm shift of new media is that in the traditional world, the period at the end of the last sentence was the end of the story. Today, it’s just the beginning.”

The people formerly known as the audience are participants in a dynamic web.  It is not just real-time or live, but alive. It is collective organism — living and breathing with a mind of its own.

Particularly in technology sectors, we cannot influence and win customers by aiming for print.  Who sells a technology product with a slightly more modern rendition of a Gutenberg?  Are likely tech customers perusing the six-month-old trade publications on the meeting room coffee table?

They have long since rejected the hard sell and gravitating to market conversations that are increasingly rendered in the form of compelling and visual representations of data, infographics, and six-second videos.  It’s important to underscore, they are both consuming this information and creating it — which means these forms are becoming the entry-level standard for even conversing with the people formerly known as the audience.

The idea that PR needs to evolve its skills isn’t new — there are plenty of posts on the web about the concept.  One of the original champions in my mind is Deirdre Breakenridge, who has actively promoted the idea of “the hybrid professional.” However, I think things have evolved more quickly than anticipated, to the extent I am seriously considering taking my two graduate degrees and enrolling in a community college graphical design or coding class.

Between work, my Army commitments, my daughter, and the occasional leap out of an aircraft,  I’m not sure where I’ll fit that in, but increasingly, I feel on a daily basis an intense sense of urgency for mastering the ability to communicate visually.

I haven’t given up on PR. I’m not saying PR is irrelevant.  To the contrary, I think it is increasingly more important and valuable to the marketing construct, particularly the mindset and methods, but PR has evolved into something vastly greater than itself.

Just like SEOs, we can’t just be PR pros anymore.

Has your B2B agency stopped bringing creative content ideas?
If your hired help is on auto-pilot, maybe it’s time to switch.
Here is a summary of the services we offer and the best way to contact us.
And don’t miss a post: subscribe to this blog by email here.

by Frank Strong Have you been shopping lately? I mean shopping by visiting a bona fide retail store and standing...