Home > Marketing > What a Politician can Teach Marketers about Relationships

What a Politician can Teach Marketers about Relationships 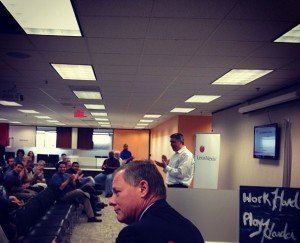 He arrived a white Hyundai Sonata.  A hybrid.  He drove himself.  He was on time.

In a country of more than 300 million, there’s only 100 sitting U.S. Senators. And yet here was one of them, making a stop at our offices, one stop among several on a three-day road trip to visit his constituents.

Senator Richard Burr, a Republican from North Carolina, was attentive, engaging and most of all he listened. He listened attentively to our division CEO’s overview of the business.  He listened during a product demonstration. And he listened to employees.

Occasionally he commented, or asked a question, but what struck me the most was how he listened.

Burr served 10 years in the House of Representatives before running for Senate.  He is in the third year of his second term as a U.S. Senator representing nearly 10 million people in the nation’s 10th largest state.  Since a senate term is six years, he’s three years away from his next election.  And yet here he was listening, engaging and answering questions from constituents. He didn’t ask for a thing.

Certainly these roadshows easily qualify as duties of an elected official — talking to constituents — but it also stood out as relationship building in my mind.  It occurred to me this is marketing at it’s finest; focused on the long term and strengthening grassroots ties a media blitz simply cannot match.

It’s an approach that’s perfect for any form of marketing: email, content and yes, social media. Build relationships now, ask for nothing in return and take confidence in the fact, we’re running to win a marathon.

Should the Taxpayer pay for Public Relations?