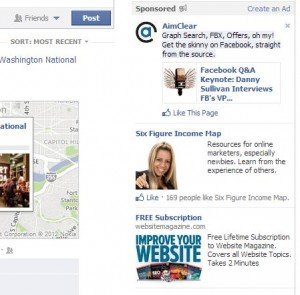 Image: Screenshot of current Facebook Ads on the side of my stream.

Rants about Facebook advertisements are a dime a dozen  and Facebook might be introducing a way for users to pay to have them removed.  I’ve seen a lot of comments in social media flatly saying they’d never give Facebook money to remove ads — it does seem a bit like holding people hostage — but clearly there’s also a market for it.

“I understand the company needs to make money (and I WANT them to make money) but why not at least honor your customers by providing an option that allows us to stop being annoyed?” wrote Mark Schaefer in a post titled pointedly, Dear Facebook. Please let me pay you.  “Let us give you a few bucks a month to end the insanity.”

The image Mark used in his post suggests a subscription fee of $20 a month as a fair price. If even a fraction of Facebook’s billion users subscribed, it’s stock price just might get back to that $38 per share mark it had for a fleeting moment at its debut.  As for the possible push back from users, Facebook has the unenviable position of a double edged sword:  no matter what they do, somebody is going to get angry.

What’s gone unnoticed is the trend towards social media advertising for content.  HubSpot pitches an ebook on Facebook marketing.  Sysomos, the social media monitoring tool acquired by Marketwire, asks, “Is your company popular?” and links to a library of content. Andy Beal’s Trackur, for example, is another company with ads I frequently see on Facebook.

These ads are all mashed in between a range of other ill-targeted promotions — from sniper-style online games — to finding a 40+ girlfriend — to MBA programs.  I’m not in the market for any of those things — and I paid my own way through an MBA program going to school at night while working full-time, eight years ago.

However, I wouldn’t pay Facebook to eliminate ads because I’m interested in them:  I’ll click on the links to see what these companies are selling and to study the approach. In most cases, whatever content is linked is usually accompanied with a signup form asking for an email address.  I call this paying for the bounce because in inevitably, while the content looked interesting, it is not interesting enough for me to get bombarded with emails and sales calls that will surely come as a result.

And I’d propose there’s another way:  link directly to the content.

Nurturing is a Better Approach

There’s  lot of marketers that scoff at this notion — we’ve got to be able to count leads and build email lists.  While I agree those things are important, the problem with this thinking is that downloading an eBook doesn’t make someone a lead, or even more specifically, a qualified lead. 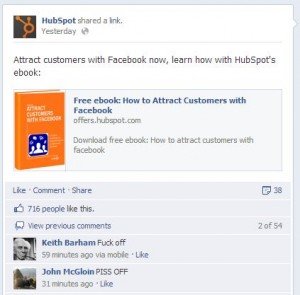 The result is that sales teams are relegated to chasing, and perhaps alienating, a possible prospect. In addition, sending emails to people who aren’t really interested and never open the message may actually harm your email marketing efforts.

There’s a sharp disdain for interruption marketing, that’s what the inbound concept is supposed to be all about.  Besides, I’d much rather engage those prospects that are truly interested, those that come back time and time again for great content and ideas. I like a prospect that raises their figurative hand to say, “Yes, sign me up for your email newsletter,” and believe marketing programs designed to do this are more effective.

When I started working in this field fifteen years ago, everything was “proprietary.”  Methods and processes were closely guarded secrets, until the web forced people to open up.  Today people actively share some of their greatest ideas freely for one simple reason: show people how you do it, and chances are they’ll not only trust you, but come back and make a purchase when they are ready.

Professionally, I’ve paid for advertising on social media for earned media purposes and with great success because I’ve been able to reach reporters and bloggers I might not other wise have found; instead they found me, or rather, they found my content.  This resulted in substantial amount of earned media coverage — and also backlinks subsequent traffic.

Personally, as I’ve embarked on an employment search,  I’ve had a lot of success with both social ads and an experiment with AdWords — all aimed at promoting content freely.  Rest assured, I’ve been cost conscious since its coming out of my own pocket.   However, it’s proven effective and has led to a lot of inbound phone calls, emails and conversations, that would have never have happened otherwise.

So my suggestion to marketers is to experiment.  If you’re running social advertising program for content that forces interested visitors to complete a web form before downloading — be sure to run a second promotion where the content is  free.

PR Daily ran an opinion piece that said, the PR industry today looks an awful lot like advertising. Why does...