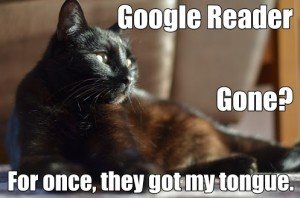 Google announced it’s shutting down Google Reader. The company cited declining usage of its aggregation service as justification for killing it come July 1, 2013, but the web has exploded with unhappy comments.

I’ve seen some pretty smart people react so viscerally to this announcement, that it must be worth hitting the pause button and perhaps putting some fresh paint on the Google Reader shutters.

One principle crisis communication experts champion is the principle of building trust and relationships before you need them.  When your knee-deep in a crisis, trying to problem solve and untangle a web, you don’t have time to make friends.  People are more inclined to provide a favor when you need one, if you’ve given freely well in advance.

As remarkable as Google is, it’s still needs friends.   In the past, there’s been plenty of Google bashing — from WiFi snooping to anti-trust investigations.  It will have plenty of issues in the future.  From products, to markets, to regulation, Google needs to win friends and influence people… just like any other business.

A quick glance at my Google+ stream indicates, the community that has invested so much time in curating RSS feeds in Google Reader is that community. This is a golden opportunity.

What Google Should Do

As the announcement gained steam yesterday, Ike Pigott revived an old post he wrote in 2009.  It is a very sharp analysis of Google’s role in the content ecosystem titled, The Engine.  In the post he said the following:

What makes this interesting is Google’s role throughout. In the course of the content, Google plays several key roles. Not a monopoly, but it is a player in:

Today, I think we can safely add the game-changing Google+ to Ike’s “content sharing” category.

Even if Google cannot monetize aggregation, there’s an argument to be made there’s a lot of value in the goodwill it would gain by keeping the service, or even improving it.  For those that argue there’s a weak correlation between long term relationships and business success, I’d point to a definitive financial term called goodwill.

There’s a huge PR opportunity for Google to say, “We’re listening.  We didn’t realize how many of you are such fanatics about Google Reader.  Today, we’re announcing we’re going to keep it.”