Is Yelp the New Front Page? 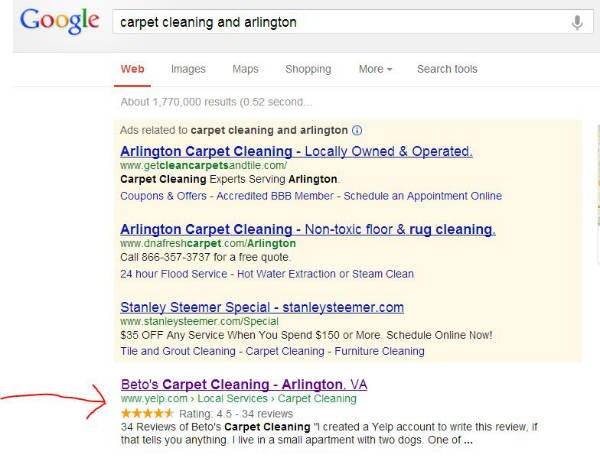 About a month ago I needed to get my carpets cleaned. As is instinctive with so many consumers these days, I turned to Google to find a professional carpet cleaner.

The first organic search result was from a review on Yelp for “Beto’s Carpet Cleaning.”  There were 30 or so reviews for the company and the commentary was overwhelmingly positive.  One reviewer wrote, “I created a Yelp account to write this review, if that tells you anything.”

The company’s carpet cleaning site is simplistic. He’s not on Twitter or Google+.  He doesn’t have a blog, he’s never issued a press release, and I’m the only fan on the company’s Facebook page.

I called up Beto — and two days later he and a helper showed up to do the cleaning.  They were in and out in under 90 minutes — and maybe less — and I was set back just $140.  That’s very inexpensive for this neighborhood and the quality of work was top notch.  I was a happy customer.

In a post called, The Party’s Over for Professional Reviews Leading the Purchase Cycle blogger and marketing guru Danny Brown cites research from by Weber Shandwick and KRC Research that supports his headline.  Professional reviews, that is the type of product reviews that might be written by the mainstream media, have ceded ground to peer reviews published on online review sites like Yelp.

“Now, social connections and search play a far greater role in the purchase cycle, often ignoring professional reviews altogether,” wrote Brown. The research report itself underscores that point in the second paragraph.  “One resounding conclusion from our study that CE companies can’t afford to ignore: reviews drive sales.”  The report is referring to customer reviews.

CE stands for consumer electronics and while this study is industry-specific, it echoes a consistent trend that’s emerged over the last several years across the board.  For example, a Nielson study (link has moved) in April 2012 found, “Ninety-two percent of consumers around the world say they trust earned media, such as word-of-mouth and recommendations from friends and family, above all other forms of advertising—an increase of 18 percent since 2007.”

The importance of user-generated reviews and the impact on sales is so significant, that businesses are increasingly paying closer attention.  Yet the medium is still new — especially to many small businesses that are not adept to digital marketing.  As a result, they often take misguided measures to amend them.  For example, a moving company sent a threatening letter to one unhappy customer after she posted a negative review on Yelp.


Yelp as the New Front Page

Several years ago, as SEO broke into the mainstream, a popular idea emerged:  Google is the new front page.  PR became increasingly important for its ability to earn media — and backlinks from credible sources.  Backlinks are considered a vote of confidence by the search engine, and still arguably the single most important search signal.

PR of course, is an acceptable white hat method for obtaining backlinks.  Earning media is not easy work;  it’s getting harder all the time and bad actors seeking shortcuts began using nefarious methods to get backlinks.  Google caught on and addressed the matter with updates such as Panda and Penguin. Those caught gaming the search engine saw their search rankings — and sales erode.

Google has also implemented other factors — it’s increasingly placed an emphasis on returning results based on a user’s history and preferences.  Local listings play a big role and that means review sites like Yelp, rank very high on searches.  It’s helped too that Yelp has taken measures to mitigate fraudulent reviews on its site to improve the authenticity of results.  Yelp saw 100 million unique visitors this past January — a single month record for the site.

Google also likes traffic — because it signals a site’s veracity and relevancy.   It’s a bit like the slingshot around the earth the Space Shuttles used to travel — using the earth’s gravity for a little extra momentum to get NASA’s PR robots into outer space.  Yelp is the new front page.

The Changing Meaning of Earned Media

The aggregate of reviews on sites like Yelp are having a big impact on the meaning of “earned media.”  Every comment, every tweet, every social share…adds up.  In isolation a single review is relatively harmless but in aggregate, they are compelling.

That’s why an organization as big as the NHL will respond to a Twitter complaint from anyone, even a user with just a few hundred followers.  The size of a social following is not a measure of influence. Simple acknowledgment on social networks ought to be a top priority — and it turns fans into fanatics.

Very early in my career, long before the advent of social media and online review sites, a senior manager told me to treat every reporter as if they worked for The Wall Street Journal.  This is because reporters change jobs, they trade notes, and they keep an eye on each others’ work.  No one watches the media like the media — and earned media momentum is more easily transformed into more earned media.

It was sage advice and it’s even more relevant today.  A post on an influential blog might make a splash for a short while, but the web moves quickly:  big hits and heartaches alike fade quickly.  In contrast, the aggregate of online reviews are cumulative and withstanding.  In addition, Yelp is likely to rank much higher in search and provide a variety of viewpoints all in one place from like-minded customers and peers.  The customer is the biggest influencer that star-struck businesses tend to overlook.

While I’ve kept and eye on Yelp for a while, I’ve never participated.  The same day I wrote this post, I registered on Yelp and submitted my first review:  I gave Beto’s Carpet Cleaning five stars and I hope in a small way, it adds up to help your business Beto.

Brand Extension: When a Beer is No Longer a Budweiser

Budweiser drew well-deserved applause for its Clydesdale commercial about Hope.  It was a good story which made for great marketing. Like other brands,...