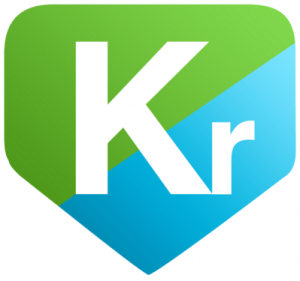 Social scoring is a polarizing development in social media.   It’s a label that boils the value of a person down to a number.

Numbers can be positive like the #12 of a quarterback, or negative, like a prisoner number.  I’ve spent a long time in a military uniform — we all get numbers — but in that case its a means for equalizing the playing field.   As the famous line in Full Metal Jacket (NSFW) goes, “Here you are all equally worthless.”

With numbers comes comparison and contrast — and a difference that’s akin to the argument over the have’s and the have not’s.  I believe people should be paid for performance and promoted for potential.

However, within social media circles, a few words of late have given me pause.  For example, in an interview with Geoff Livingston, Andrew Keen, the self-titled, “The Anti Christ of Silicon Valley” said:

In my book I write about Robert Scoble who epitomizes this new class of influencers. It’s a very sort of Darwinian world where has a tiny handful of people on Twitter and on Facebook and on Klout and all these other networks with huge amount of influence and then everybody else. So, we have a new kind of aristocracy in our reputation economy.

One Problem of Social Scoring

One problem with social scoring is that it can be gamed.  “Thanks to some social scoring sites, anyone can appear influential. Increased activity on Twitter and Facebook can see your score on the likes of Klout skyrocket,” wrote Danny Brown in a post titled, Social Influence and The Marketer’s Dilemma.  There’s a lot of merit to Danny’s point and in fact, and he’s well studied on the topic; he’s written and entire book on influence marketing.

However social scoring sites like Klout, Kred and PeerIndex have increasingly responded to this criticism and indications are, they’ve made gains in rooting out gaming.  For example, Jim Tobin, of Ignite Social Media, a firm that has done influence marketing work for brands like Chrysler,  conducted a gaming experiment.  He purchased 10,000 Twitter followers and yet it made virtually no impact on his social scores by any of the major scoring services.

Google Trends comparison of searches for Klout, Kred and PeerIndex

A Problem that Social Scoring Solves

In a post themed Why Klout matters, Mark Schaefer acknowledges both the challenges and possibilities of social scoring.  He points out the service can be gamed, it breeds discomfort and has difficulties with precision, but he also says “content is power.” By this he means the following:

The ability to create and move content is the absolute key to online influence.  So think about this — To the extent that you could actually measure that, wouldn’t you also be creating an indicator of relative influence?

That’s what Klout is trying to do.  They are finding the people who are experts at creating, aggregating, and sharing content that moves online. Nothing more.

Schaefer is also a published author with his own book on social scoring and influence.

With millions of users creating and sharing content on social networks, it’s pretty challenging to manually discover new influencers.  Sure, we all have our favorites — I’ve linked to mine in this very post — but that’s personal affection.  I follow these folks for a mix of learning, work and recreation.   For a business, or an organization, it may be different and social scoring provides a starting point for branching out and discovering those you might not otherwise have discovered. 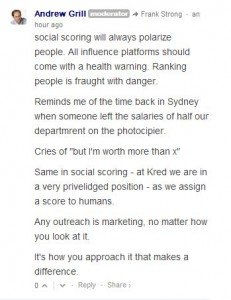 Earlier this week, Kred sent emails to who it says are the top 1%, 5% and 10% of influencers on its network.  The emails looked like this and consequently  Twitter lit up.  The number of followers did not appear to be a factor for the top x% label, since Twitter users with ranges of followers from as few as 5,000 to more than 500,000 both received a 1% note.  Many recipients tweeted, published blog posts and even press releases announcing Kred’s nomination.

Kred CEO Andrew Gill explained Kred’s social analysis and motivation in a post of his own that concludes “humans still crave recognition.”

As might be expected, the emails certainly produced debate in the process of understanding the context. Andrew was quick to personally chime in, earned praise for being direct, and noted later in a reflective post, “My style has always been to be open and honest when commenting publicly on any company I represent, while of course keeping the interests of the company at heart.”

There’s no doubt the emails are part marketing, as Andrew noted in the comments, “Any outreach is marketing,” but I also think it’s savvy for two reasons:

The Future of Social Scoring 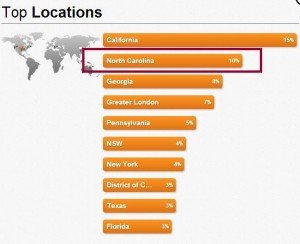 Kred says 10% of my engagement stems from North Carolina, which is meaningful to me.

Marketers, I believe are going to have to get past the moral dilemma of social scoring.  Though it’s easier to see online, there’s an element of social scoring that’s existed our entire lives:  how do kids get popular in kindergarten or even high school?  It’s why football players, rock stars and politicians get privileged treatment.

I’m not arguing whether this is right or wrong — I’m pointing out it’s a fact of life.

In looking at the analysis Kred has done on my own social activity, I was intrigued to note that 10% of my social media interaction — the second highest on my chart — came from North Carolina.  That’s positive news for me, because there’s no doubt I’m interested in engaging the community in that region.

Shonali Burke, I think summed up social scoring nicely when she said,

“But the fact is that social scoring is here to stay, so we may as well figure out how to live with in a world that, more and more, is moving in that direction. Tools like Klout and Kred (and numerous others) may give you a starting point when it comes to determining relevant influencers, but it’s just that – a starting point. Your brain needs to do the rest of the job.”

In the meantime, Andrew, I admire your risk-taking, openness and candid conversation.

PR should embrace content marketing. If there's one trend that has reached a tipping point in PR -- it is...