Home > PR > Ode to the Contrarian

Ode to the Contrarian 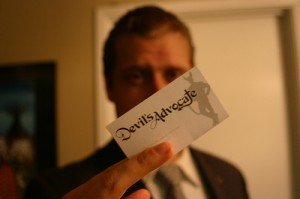 It’s not easy to take an unpopular stand, but it might be worthwhile.

How often have we mulled over a post and left it unpublished in the draft folder? There’s a dozen in mine and I generally take pride in calling things like I see them.

When the king is naked — he’s naked.

Some people dislike that — it can be abrasive. Some people love that — it’s transparent. Often, there’s a whole cast of characters that fall quietly in the middle.

An advocate, devil or not, is useful. Or it ought to be useful.

Utility of a Challenge

Challenging an idea is useful. Repeating popular mantra’s is an echo. Letting an idea go we disagree with for fear of social grief? That’s weak. It borders on irresponsible. Throughout history, it’s proven dangerous.

Marketing is not usually about such matters of gravity. But what frightens me about these reservations is the indication of just how deeply social pressures are weaved into our life’s fabric.

Indeed, that might be an evolution of survival, but survival isn’t the same as success.

Mark Schaefer made an indelible impression on me when he went against conventional wisdom and said Klout matters. To him, it’s not about influence per se, but about who can “move content.”

Mark’s view is but a seemingly solitary voice amid a sea of posts that bash Klout. But it’s a clear voice. It’s a rational voice. It’s a voice that reasons.

We don’t have to buy his reasons, but if we only read reasons we agree with, our worlds get pretty small and quickly.

The Diplomacy of Disagreement

Disagreement is not the same as snark. It’s easy to make snark: a quick meme or a hand-drawn picture on a PostIt note published to Instagram. Snark gets social shares — and by extension some perception of social proof. Well-timed snark creates the illusion of thought leadership.

However, snark is easily forgotten. Campaigns with conviction? Those get carved in stone.

There’s a diplomacy to disagreement. The goal should not be to disenfranchise but to foster learning through the utility of challenge. Many of us grew up under these auspices in the academic world — be that in kindergarten or a doctoral program — but somehow forgot them along the professional journey.

We know the way we communicate words, often matters as much as how words are communicated. But to that means the end is not always well-received. Sometimes the means is the end.

Certainly a strong opinion, no matter how well-reasoned, will disenfranchise some. However, adults, and certainly adults of a professional nature, can and should be able disagree and to the betterment of the profession, or a relationship, or practical and intellectual pursuits.

By the same token, when we speak out, we often find agreement that might not otherwise have come to light. There’s merit in saying what many think and feel but are to afraid to say outloud. Or at least to be the first to say it.

Groundswells don’t start in a herd.

The ability to disagree is a freedom, at least in law; the social pressures are another matter. We can accept the risk — lose a Facebook friend — or we can go without record.

What’s in your draft folder?

Advertising offers great message control but questionable credibility.  PR offers credibility through third party validation, but there are no message...