No Doomsday? Say Something Nice on Social Media 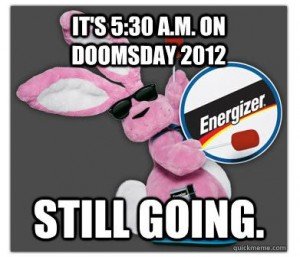 I don’t know anyone that took this so-called Mayan prophecy seriously — certainly I did not — but it’s always useful to find a reason to be positive.  Moreover, I think we should use today as an excuse to be just that and to demonstrate it on social media.

Why?  Because there are too many rants on social media.  Too many people engage brands on social media with an air of entitlement. A couple days ago, I watched one person — who self-identified as community manager for a brand — attack another brand on Twitter and was completely wrong about the whole thing.

It was unfair.  And for a brand’s community manager to engage in such behavior; be careful young lady: what comes around goes around.

Even the venerable Jim Sterne, who says he’s been on Twitter for five years and has only complained publicly twice got into the game. He takes UPS to task in his ClickZ column this week.  Kudos to FedEx for being on their social toes; but as a long time FedEx customer, Jim, I can tell you Fred Smith & Co. isn’t perfect either.  But they are good enough and I’m no VIP.

As for VIPs, Adam Toporek made a strong point in a post titled, Is Every Customer Really a VIP?

Unfortunately, no, they are not.

In common usage, the term VIP means someone who is deserved of special treatment above and beyond what is typical — and, by definition, that is not everyone.

Why? Because in the real world organizations must operate with limited and often inadequate resources, and these resources must be allocated to the areas that will produce the greatest return.

In fact some businesses charge for 24 hour support.  It’s a business model and now suddenly with Twitter they are supposed to give it up for free?  If that’s the case, RedHat, which has built an entire business on selling support services for open source software is screwed.

Since we’ve got a new lease on life on this here day the 21st of December 2012, let’s take the opportunity to flip this whole conundrum on it’s head:  give a social media shout out to a brand today. Tell them what you like about their product or service.  Give the brand a compliment.

It’s dawn on doomsday; I guess that means the world hasn’t ended:  go say something nice!

Terms of Service: No Way to Build a Brand

by Frank Strong It used to be that the news cycle was a grueling 24 hour frenzy but  Instagram’s quick...