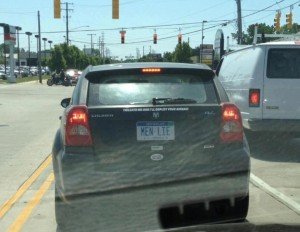 A rather unfortunate license plate for third party validation.

Nothing you say about yourself will have as much impact as someone else saying it on your behalf;  that approaches a definition.

Having just anyone say something on your behalf, won’t carry as much weight as having the right people say it on your behalf; that approaches strategy.

We’ve got to get over the first hurdle if as an industry we’ll ever tackle the next one;  that is a fact.

The definition of PR is controversial in many circles.  In other’s it’s not.

It’s not my intent to rehash the debate.  I’ve done that already here and here and more importantly, long before the debate ensued, here.   You can put lipstick on a pig, but you risk becoming the next pink slime:  an idea communicated so elegantly, that no matter the facts, it the power of the message cannot be overcome.

My views aren’t popular with the academics, or the associations, or the old school veterans that resist change.  Quite frankly,  I don’t care.  They are beating a path to irrelevance…and that’s not drama, it’s a reality.   In crisis communications, the absence of voice only leaves a friction-less environment in which others frame the story for you.   That is unacceptable…but only if you believe in what you do.

PR is not evil.  It can be manipulative, but it doesn’t have to…and manipulation usually fails in the long run.  It is, it should be, it ought to be, honest communication.  And communication is a right with roots in our very own constitution, with implied, not specific tasks.  Thomas Paine’s Common Sense became a phenomenon because it was a powerful idea and he told people about it.

He advocated.  He lobbied.  He communicated.  He rallied the right people to his words, who in turn rallied others.  People communicated his ideas on his behalf and that gave them credibility.  Without those third-party voices, Thomas Paine was but a tailor with a bold pen.

The people my views resonate with are the practitioners, because these word resonate with clients and prospects and the C-Suite.  The C-Suite encapsulates business, non-profit and government.

If a public affairs official ever says they aren’t “selling” somthing; then they are wrong.  Everyone is selling something.  Public affairs sells ideas — and the relevancy of those ideas are rendered in the form of budget allocation.

Third-party validation doesn’t make sales; it makes more sales, it makes better sales, it makes recurring sales.  PR is a touchpoint on the sales cycle.    And we’re all selling something:   Donations for nonprofits.  Memberships for associations. Applicants for colleges.  Votes for politicians.  And political support for government agencies.

Love or hate the analogy, it makes the point.  Left out of the example is the point it’s the beautiful women’s friend that offers her analysis.  It’s not a stranger, it’s not the bartender looking for a tip, it’s her friend:  a trusted source.

Sexist?  Maybe.   Corny?  Perhaps.   Accurate?  Yes.  Would the same example fit if gender roles were reversed (or mixed even)?  We all know the answer:  nothing you say about yourself can be as compelling as someone else saying it on your behalf. We can’t devise a strategy if we cannot figure out first, where we are going. 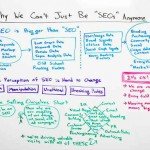 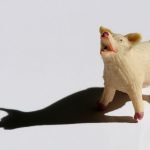 PR as Lipstick on the Proverbial Pig

Is attacking a smart PR strategy for start-ups?