Home > Social Media > We are all journalists, but are we editors?

We are all journalists, but are we editors? 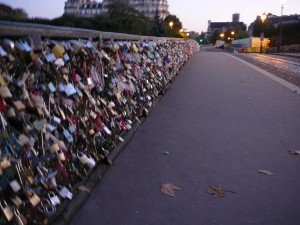 No editors exists on the locks in Paris.

ed·i·tor  noun  1. a person having managerial and sometimes policy-making responsibility for the editorial part of a publishing firm or of a newspaper, magazine, or other publication.

“We’re all editors now.”  So said Mike Huckabee on a satellite radio broadcast of his right-leaning Fox News show, which I heard in between the seemingly ubiquitous advertisements for Reputation.com, and my incessant channel flipping.   The flipping was surely a result of the annoyance with the the sizable volume of Sunday evening traffic on Interstate 95 North.

Even so the contrast struck me as stark.

Reputation.com was pitching a service to help businesses deal with negative reviews, which essentially strives to add content to the web so as to push search results for those reviews downstream.   To paraphrase the commercial:  no matter who you are, you’re likely to get negative reviews at some point, and absent context or vetting, people will believe those reviews and you’ll lose sales as a consequence.

The service markets to an emotion of fear, which is something I personally, loathe.

The former governor and presidential candidate made this statement in a response to a question from a young member of his live audience, who asked about the persuasive impact of comedy shows like Stephen Colbert and Jon Stewart.  These shows present a satirical perspective of news broadcasts and arguably have a left leaning bent; they are more opinion than fact, but the power of humor seems to override the distinction.

Huckabee’s response to this question was uncharacteristically neutral.  Satire, he said, only works if there’s a bit of truth, but readers, viewers and listeners need to filter content on their own to decipher truth.  It used to be, Huckabee continued, with a tinge of nostalgia, that an editor served as  a filter between reporter and audience.  With experience and intuition, editors filtered fact from fiction, and thereby presented an impartial view of any given news report.

It was always better before when we live in the after; age may well selectively remember a better yesterday.

In this modern day of citizen journalism, that filter no longer exists, if it ever did, and therefore, we are all our own editors now.  Some find this liberating, while others, refuse to accept the inevitability, on grounds that nearly approach ideology.  They choose instead to cling to a past that clouds better judgement.  If we are all editors, the standards, by which that editorial impartiality is measured, may vary.

I’m reminded of a chance conversation I had with an entrepreneur, a pediatric dentist, who openly admitted to gaming negative comments.   If a negative rating appears on any of the numerous sites that rate dentists, he has his business manager write another negative comment.

For example, his business manager will write – pretending to be a patient – that the service was great, but the dentist kept them waiting 10 extra minutes.  He’s betting such posts are disarming; for a parent worried about taking their child to the dentist, a 10 minute delay is the least of concerns.

Clearly there’s something disingenuous about that approach, yet that dentist made a counter argument that sounded eerily like the Reputation.com spot:  negative reviews are often one-sided slants from customers that cannot possibly be satisfied under reasonable business circumstances; cyberdisinhibition.

It causes me to ask, in this attention deficit economy, are we that quick to judge?  Will we not go beyond one or two posts before dismissing a product or service that could otherwise meet our needs?  If that’s the case, then we are all journalists, but we are not all editors.

Social Media Strategists will be Gone in 2 Years