Home > Social Media > Social media is like driving in the rain 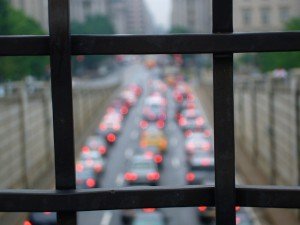 Oh, the commute.  DC area commuters know what I mean.  Sigh.  It gets worse every year.  Housing bubble?  What housing bubble?

New apartment and condo buildings go up every day.  I left for a year and recently returned to a new skyline.  New buildings mean more vehicles.  Think more cars.  And SUVs.  And lots of them.

One co-worker theorized today that rain brings out two types of people that clash on the interstate:  the more aggressive and the more cautious.  The two do not mix well.  Another said it’s because DC is a transient city.  Few people that live here were born and raised, which means the Nation’s Capital has an eclectic mix of driving styles.

For example, if you drive in New York City, everyone is from New York and they all drive the same way. However in DC, we have people from the East Coast, from the South, from the West Coast, and on and on.  Throw them all in the mixing bowl, and chaos ensues from different driving styles.

At one point, today, where the road merges with another I had an epiphany.  When roads merge, drivers are supposed to alternate.  One vehicle gets to go from one lane, then another from the other lane.  Such cooperation makes the merge smoother.

But DC drivers don’t follow this rule.  Especially when it rains.  Two and three cars will go at a time; each vehicle looking for the perfect angle to block the other lane from their turn.  Those that miss the angle veer into the break down lane on the right, speed ahead and then cut back over.  “Road hog!” yells Mr. Magoo.

The municipalities are pretty much useless in this respect too.  I believe one of the easiest fixes to gridlock in DC is to produce a communications plan and signage that instructs vehicles to alternate.  Something like the “don’t block the box” campaign in New York.  But they don’t.  Instead they focus on red light cameras — and in Maryland — they love the speed cameras.  Anything for an extra buck…to be spent on every program except infrastructure, which the DC area desperately needs (but that would require inter-municipal consensus among local governments that can’t cooperate with themselves).

So what’s the epiphany?  Social MEdia is becoming just like this:  there’s no yield and for all the deference paid to “listening” there’s a lot less of that going on than there is talking.  Me. Me. Me. Media.  The Beatles may write a song about it yet!   Talking about ourselves, according to this study, is as powerfully addictive as crack for our egos.

“Me” is like advertising and nothing we say about ourselves can have the same effect of someone saying it for us.  It may take a generation or two, but soon we’ll kill off an invention meant to bring us together.  We’ll learn to ignore it as we’ve ignored ads in print, or despised pop-ups ads on the web.

I hope I’m wrong.  I hope we give.  I hope we  — collectively give — yield.  Let others into the lane. But I also hope DC will start ticketing people that don’t merge. That means asking a traffic cop to stand in the rain.  That’s not likely to happen.

by Frank Strong Facebook is experimenting with additional ways to monetize its platform and it’s doing so to signal to...