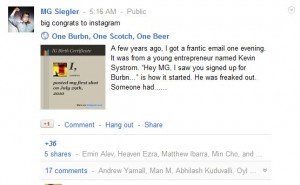 Big name tech bloggers.  You either love them or hate them.   I suppose there’s a third option:  love and hate at the same time.

These guys and gals can be subject to a lot of criticism.   Old school journalists cite their quick posts as cavalier and lacking thoroughness. Entrepreneurs tackle their opinions.  Everyone keeps the traffic flowing.

I was taken aback today by the sheer viciousness of the commentary following MG Siegler’s link on Google+ to a blog post he published about Facebook’s acquisition of Instagram.  It appears to me he’s turned comments off on his blog, but there isn’t a way to do that for Google+.

I won’t rehash the vitriol here; you can review them on the link above, but suffice to say MG’s been called every name in the book in response to what I thought was a pretty good post.

Lots of outlets, especially newspaper Websites still struggle with comments.  Seems a couple times a week, a link that Drudge posts is to a small newspaper with an audacious headline and story – and a bevy of swear words in the comments. Local TV station Websites are usually the worst.

With so many comment systems out there – Livefyre (which I use), Disqus, Facebook and Twitter – its nearly inexcusable for news or blogs to not have some sort of moderation.  But on Facebook page and Google+ it’s a lot harder.

Delete the comments and you’ll be slammed for trying to cover it up.  Leave them there and more trolls pile on.  It’s a lose-lose situation.

I don’t understand what it is with the modern Web, this disintermediation, this separation that makes people feel it’s okay to be so brutal.  I’ve got no issues with strong opinions and rebuttals, and I’m all for the good reasons to comment on blogs, but cussing “like they ain’t got no mamas?”  There’s a more diplomatic way to get the point across – and without disenfranchising others.

As for you MG?  Keep your chin up.  Often comments like these have a greater reflection on the commenter than the subject. Haters gonna hate.  It’s like a lemon in Paris.

Can PR Support Thought Leadership? (Or Are They Mutually Exclusive?)

Note: This guest post is by Grant Crowell (see bio below), a freelance writer who I met through Twitter and...