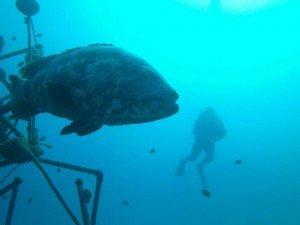 I’ve become a pretty avid scuba diver, with 70+ dives under my belt, and as you can probably tell from the many photos I use for this blog (that’s a photos of a giant Grouper nearby), but I’m working on another type of diving:  skydiving.  Uncle Sam has trained me to mountain climb and rappel from helicopters, but I never could get jump school out of him, so I’ve decided to do it myself.

While I’ve gone tandem, there’s something about that leap of faith at 13,000 feet – with a 40 second freefall – when you’re on your own.  I’m a firm believer that adversity, challenges…fear of bouncing off the earth…they build character.  There’s nothing wrong with a little fear – it keeps you on your toes.

At any rate, I’ve been delayed twice this week due to weather – thunderstorms one day and high winds the next.  But perhaps tomorrow, with some gentle westerly winds, I hopefully will knock out both Category A & B dives.  Can the Easter Bunny deliver some clear, calm sunshine to Virginia? Warmth would be nice too.  Word in the hanger is it’s about 15 degrees up there right now.  You can read a post about my tandem dive, with a viral marketing twist here.

And smart things for the week:

1.  PR’s timeless fiasco. “Nine-and-a-half seconds. Or the time it takes to upload a YouTube video. That is how quickly corporate reputations can be hit these days,” wrote the Wall Street Journal in an article titled The Short Life of a PR Fiasco.  The PR Daily wrote a sound analysis of that article which in turned caused me to write about social media crisis prone  companies.  While I aimed at preventing crisis from happening, the WSJ quotes Robert L. Dilenschneider, who echoes words I long remember from Lanny Davis (of Clinton era crisis), whose lesson was tell it early, tell it often, tell it first.  The smart thing from this article is:

Tell it and tell it fast. If you do that, it goes away in a day. The attention span of the public is very short.

2.  Think different, market different.  Forbes had post that struck me as creative: Madonna Bundles Album with Ticket Sales to Ensure Number 1 Debut. Though the article says she’s not the first to try this tactic (she’s pitching her new album MDNA and it includes iTunes downloads), much has been written on the music industry which boils down to this:  artists and music labels (in this case Interscope) make money from ticket sales, not albums anymore.  The music is the marketing now.  Why wouldn’t you bundle your music with a ticket to gain playing time, whether that’s on traditional broadcast radio or a fan’s iPod?  The smart thing is reminiscent of Chris Anderson’s freemium model:

It’s a smart marketing move for Interscope. It unnaturally inflates sales, and uses “MDNA” for what albums have become–souvenirs, or loss leaders.

3. Benevolence as currency.  Now and again, Brian Solis writes something that really resonates with my thinking.  Those that follow his blog know he writes a lot, so “now and again” might be an understatement (especially if you search his name on this blog).  Lately he’s been honing in on social comers and in a post titled The 6 Pillars of Social Commerce: Understanding the psychology of engagement, he’s talking about benevolence that seems to me a bit like the catch phrase “pay if forward.”  It’s an idea, that as a PR pro, I completely buy into and have been quite successful with (see #5)  throughout my career.   So trust the process when Brian says:

Perhaps the greatest asset in social capital is that of benevolence.

4.  Researching people.  Tom Webster writes a thorough analysis of Burger King’s current ills, having fallen a notch from second to third place behind burger giants McDonald’s and Wendy’s.  In Tom’s view it boils down to research, which he segments into three areas.  You’ll have to read his post, How you know you’re asking the wrong questions, to find them, and while it’s a long post, it’s a worthwhile read.  There’s a comment too, from Mark Schaefer, who in his usual contrarian form, challenges many of us to question our own assumptions.  The smart thing?  This:

What smart things have you heard this week?

Why companies are more prone to social media crisis

Why would a business deflect the opportunity to speak to customers? I got an email today, no two, from vendors. ...