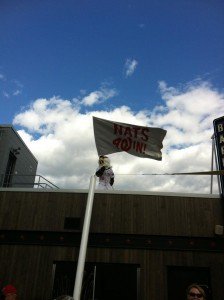 Hey, the Washington Nationals won their season opener yesterday with 3-2 victory with an extra-inning over the Cincinnati Reds. That’s got to be a good omen even if DC’s traffic is an everlasting nightmare. Nearby the Nat’s mascot waves the club’s flag as happy fans exited the stadium – this mascot doesn’t get the opportunity to do that often!

Returning from the game, the first season opener I’ve ever attended, I sat down to write this week’s smart things:

1.  A secret to building a blog.  Comments – as bloggers, we love them on our own posts, so it seems logical to build a blog, it’s important to comment on other blogs.  Ken Mueller wrote a fantastic post last week titled 6 Reasons You Should Comment on Other Blogs that explains why.  For example, his first reason is “you get to know other people” and that’s very true. There is a sense of a sub-community among people that comment regularly.  Ken’s enthusiasm also comes with guidelines such as, “don’t comment just to comment,” which is sage advice; save your comments for when you really have something to offer.  In the spirit of his post, there’s a lively discussion with great points in the comments on that post.  Smart thing:

But there’s one area of blogging and marketing that we tend to ignore: commenting. And I don’t necessarily mean the comments on our own blogs, thought that’s important. I’m talking about the importance of commenting on the blogs of others.

2.  Considering the source.  South Carolina Governor Nikki Haley was subject of a crisis recently; but the crisis was based on false information.  Unfortunately, several mainstream publications ran with the story without checking the veracity.  There are several worthwhile posts on the topic including Jeff Domansky’s summary and crisis analysis.  Toddi Gunter focused on the problem in a BlissPR post called, Consider the Source. The title is the point, but it applies to more than just reporters – in a world where infographics are created and shared without much scrutiny, I think Toddi’s words are guidelines for everyone.  Smart thing:

I believe it is more important than ever that the reader, whether it is a citizen journalist, professional journalist or the man on the street, think critically about the source of the information.

3. PR has a negative vibe?  EverythingPR’s Shanna Mallon posted a story this week on the industry that I thought was especially well researched called, Why Does the Word “PR” Put Out Such a Negative Vibe?  She lays out the foundation with references from Bernays to MJ Siegler and then asks, if PR has such a bad vibe, why does it work and why do people still use it.  Her entire post is worth a read, but I believe it boils down to something close to this smart thing:

“PR–finding people who genuinely like a product or service and getting them to talk about it. This type of publicity doesn’t come across as contrived; rather, people tend to trust it.

What smart things have you heard this week?

New social networks used to be greeted with enthusiasm – Friendster, Friendfeed, MySpace.  Each one got a little better, gained...