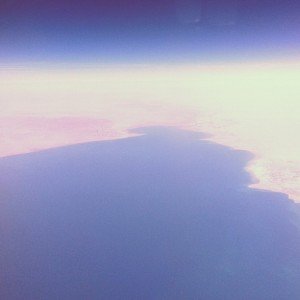 Back in town.  Back to blogging.  Back on track this week, after a brief hiatus, to a weekly “smart things” post.  Celebrating the new template and migration to WordPress from blogger. There’s still a few bugs to be worked out, but it’s a success in my book.  I plan to do a post next week and share some of the thoughts I have after going through the process.  Hint:  WordPress is way better!

The photo nearby?  That’s a 36k view of the Sinai Canal at the tip of the Red Sea, shot from a Boeing 747 (my freedom bird home) with a little help from Instagram.

1.  Boiling down measurement.   Einstein is often cited as saying, “Not everything that counts can be measured. Not everything that can be measured counts.”  That’s the point I take from Denise O’Berry, a long time small business writer, in her post Are You Measuring the Right Thing?  We should measure so we can make decisions; we make decisions so we can improve;  Denise boils it down to a few smart sentences:

You place an ad in the newspaper. One thousand people read the ad. And you consider it a   success even though no one bought your product or service. Sounds silly, doesn’t it?

2.  Speed, crisis and overreaction.  John Bell is one of those under recognized bloggers that may get less views, but often I find he says smarter things and it makes his blog a must have on RSS.  John notes in a post titled, Don’t Overreact to a Potential Social Media Crisis, the tendency for some companies to do just that.  He gives a few examples, including McDonald’s response to it hash tag crisis as a model to follow:  they observed, learned and drove on.  It reminds me of when my boss turned to me after a crisis of our own a couple years back and said, “What did we learn from this?”  Operative word?  We.  John’s smart thing follows:

Speed does matter. But so does judgment.  Not every flare up in social media will accelerate to a full blown crisis. The trick is to, of course, be ready, but also to keep a cool head and really listen and understand what is going on.

3. Bad PR pitches.  Generally I dislike rants against PR people – almost have the same distaste for them as the catalyst that causes them.  But when a writer as talented as Danny Sullivan takes the time to both rant and provide insight, it’s becomes a constructive post worth sharing. In a post titled, Bad PR Pitch #1: “Open To A Conversation? on his personal blog Daggle, he offers this advice, which would probably do any PR well to follow when pitching most reporters:

I deal with specifics. Is there a breaking news story? Is there a trend story I’m likely to write? I want pitches that deal with these specifics. The “let’s have a conversation” pitch isn’t specific. It’s a big, gooey mess that I don’t really know what to do with, other than to toss it in the trash. I promise. Send a good pitch about something unique or different that your company has done, something that has a news angle, and that’s what makes me want to have a conversation.

4.  Do you schedule time engage brands online?  “When was the last time you hopped online thinking, ‘Time to engage with some of my favorite brands’?” writes Todd Defren.  “If you’re human, the answer is likely ‘never.’”  Todd is one of my favorite bloggers, who like some others is blogging less lately but saying more.  His post Branding in the Social Stream, like others is worth checking out.  Here’s my smart take away from this post:

5.   Charlie bit a finger and made $500,000 on YouTube.  Remember the “Charlie bit my finger” video on YouTube? Megan O’Neill writing for The Social Times from Media Bistro reported this week, “When the video hit 50 million views and he found out he could partake in revenue sharing it was like his family had won the lottery.”   I don’t have a smart quote to draw from that post – it’s simply amazing – and sort of seals the idea that online video, indeed matters.

What’s the smartest thing you heard this week?