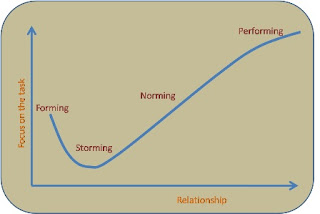 Blog posts on predictions are predictable and common.  Forecasts range from what sort of content will flourish, what networks will thrive and how the behavior of consumers – and by extension marketers – will change are plentiful.
Many of these predictions are well-grounded, but even as a social media enthusiast, I’m beginning to get a sense that the allure of social media is waning.
In making predictions I offer a caveat:   social media will continue to be an important part of content consumption and marketing.  However, I tend to think of social media behavior in the context of Tuckman’s stages for group development.
People are after all, a collective group, connected over a social network and the basis for my predictions is we are in the “storming” stage of development, where “different ideas compete for consideration.” Here is the first of my three contrarian predictions I’ll roll out over the next week or so.
#1 Social media slides down the pedestal
Malcolm Gladwell stirred controversy this year when he rejected the conventional idea that social media enabled political revolution across the Middle East. As Wired’s Bill Wasik deftly points out, Gladwell’s argument boils down to the inability to convincingly claim, “that in the absence of social media, those uprisings would not have been possible.”
Few agreed with Gladwell and even I was, at the time, critical of his analysis but the year in passing, notwithstanding having actually visited Egypt, my thinking is changing:  Gladwell is right.
For all the laudatory praise, social media traffic during the Egyptian revolution accounted for less than 1% of the total population, according to Stratfor.  If users of social media stoked a revolution, albeit a leaderless one, their longer-term success has been limited – one only needs to look at the Egyptian voting data being returned for validation. The election winners rode on the coattail of the revolution – they did not engineer it.
We do not need to look to oversees to see that this statistic is also true elsewhere.  As Forrester’s Melissa Parrish wrote in a recent blog post, “Twitter provides both an overwhelming amount of data and is dominated by a minority of influential users.”
“Twitter is a fishbowl,” Beth Harte once said to me in a face-to-face conversation.  Those words have stuck with me for many months and I was recently reminded of them when I read Infinite Stupidity, a long but fascinating read by evolutionary biologist Mark Pagel that suggests, despite our self-perceptions to the contrary, only a small number of people are truly innovative.
“What’s happening is that we might, in fact, be at a time in our history where we’re being domesticated by these great big societal things, such as Facebook and the Internet,” wrote Pagel.  “We’re being domesticated by them, because fewer and fewer and fewer of us have to be innovators to get by.”
So when I predict social media will slide down the pedestal, I’m suggesting it will drop a notch or two.  I’m not proposing social media is dead, or a waste of time, but rather we’ll begin to view it as a more tempered necessity.
Social media will still play a role, especially among Geoffrey Moore’s population of early adopters, but we’ll begin to understand that earning a social head-nod from the social media elite, is a means and not an end.  In other words, social media will facilitate initial growth among early adopters, but that market acceptance must be bridged to the early majority if it’s to be withstanding.
Tweet
Share
Pin
Share
Share

Media coverage drove Twitter’s user base, which now rests at about 300 million. That’s the conclusion of a new report...