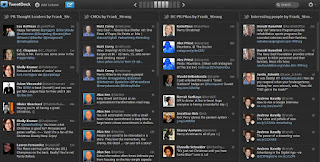 Several years ago, a client of mine and venture capitalist said to me there were three reasons for one company to acquire another:  to acquire technology, to acquire customers, or to kill the competition.

Few were surprised then when Twitter acquired Tweetdeck for a reported $40 million because they were addressing a trend:  more and more users were using unofficial client applications to interact on Twitter rather than using Twitter.com.  Actual numbers were conflicting.  At the low end, about 40% of users were estimated to be using clients (i.e. Tweetdeck, Hootsuite, CoTweet, listing), while at the high end, insiders at Twitter said that number was upwards of 90%.  In any case, at least 40 million users enjoyed the service, but avoided the interface.
Tweetdeck was among the most popular clients and for good reason:  the application functioned faster on a desk, meaning a user didn’t have to wait for an action to resolve.  It added shorting services, picture services, the ability to schedule tweets and the capacity to manage multiple accounts.  It was easy to use, slick and had an interface, as a heavy user, I found to be fluid.So like many Tweetdeck users, I was looking forward to seeing what the acquisition might bring. I’d be sorely disappointed.

In the last few weeks, Twitter has launched new code for its mobile app, something it desperately needed, and also for Tweetdeck.  The two look very similar in my view.  Gone is the slick Adobe Air to the extent, Tweetdeck no longer feels like a client, but an extension of the Web.  In many ways, it is, for example you can log into Tweetdeck.com and see the same view.

The rationale behind this is simple:  if you can get all the interfaces to function in the same way (Web, client and mobile app), it becomes much more cost effective to develop updates.  In order to do that, some features, even the better ones are cut out, or left aside.

Gone is the URL shortener extension for Bitly, useful features like marking obnoxious posts as spam, and the interface is very different:  direct messages are buried, ill-categorized and it’s difficult to compose a new direct message, the ability to scroll through lists is clumsy, moves faster than my eye can follow, and the ability to edit messages I’d like to Retweethas become more cumbersome.

I can only imagine that the motivation behind this is that Twitter.com wants users back.  The acquisition was something akin to killing the competition, melding a client with the Web in hopes of luring customers back.  I wouldn’t be surprised to find that logging on to Tweetdeck.com resolves to Twitter in 2012.

In taking out one client, it leaves room for new growth and to that end I find myself using HootSuite on the road, BufferApp for posting, and Twitter.com to interact and respond.  Maybe Twitter has succeeded for now, but I’m keeping my eyes peeled though for a new tool for the desktop.

Are you finding yourself using Twitter.com more now?  If not, what clients are you using?

The Market Opportunity: Sizing up the PR market

As an industry PR is challenged:  it struggles with who we are, what we do and how to measure our work.  It should be...