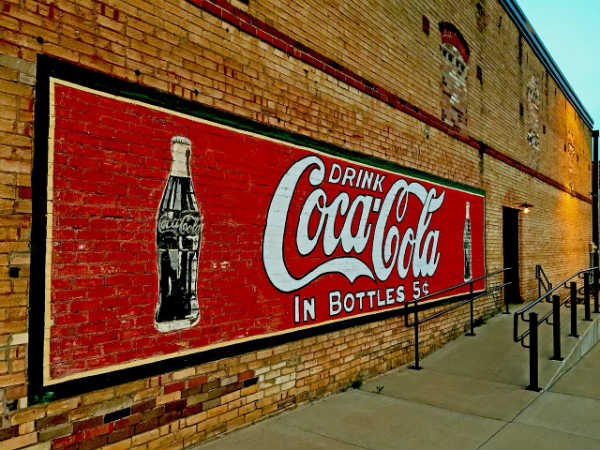 My dear mother forwarded me an email today with the subject line, “Target Says “Veterans do not meet our area of giving.” It was one of those emails that had been flashed around the world and the string was filled with vows to never shop again at Target.

According to the email, “Recently we asked the local TARGET store to be a proud sponsor of the Vietnam Veterans Memorial Wall during our spring recognition event. We received the following reply from the local TARGET management: ‘Veterans do not meet our area of giving. We only donate to the arts, social action groups, gay & lesbian causes, and education.’”

Five things entered my mind at that moment:  1) I’m a veteran; 2)  I shop at Target; 3) I recall Target made headlines last Christmas for not allowing the Salvation Army to chime bells outside their storefronts; 4) Such an act of affronting veterans is a sure path to a PR crisis that even a large corporation couldn’t possibly botch;  5) I don’t believe everything I read on the internet. 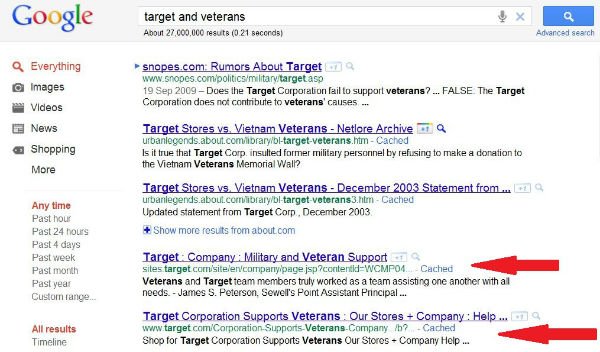 So I did a quick search, which demonstrated to me that both PR and SEO have a role in modern crisis communications.

A search for “target” and “veterans” a and saw five links disproving the contention made in that email.  The first three links were to venerable Web-myth-busting sites Snopes and Urban Legends.  Links four and five were to Target’s own site dedicated to veterans, which featured a brief stating that Target was named a “2011 Top 20 Military Friendly Company” by head-hunting giant Orion.

The email wasn’t true and Target, in my view, had been successful in getting its message out.  I sent a note back – a reply all – to my mother and the dozen or so people she had forwarded her note to with a short paragraph and links indicating it wasn’t true. Sorry Mom, if I put you out there like that, but isn’t your

Sorry Mom, if I put you out there like that, but isn’t your granddaughter cute?

See these related posts:
9 Timeless PR Positioning Strategies
Why We Can’t Just be PR Pros Anymore
The B2B Advantages of Working with a Boutique PR Firm


Not a bad result, but contrast this with the crisis communications advice three professors offered to Coke, which has a similar problem, in The Economist on February 10, 2011:

“Such rebuttals are unwise, argue Derek Rucker and David Dubois, of the Kellogg School of Management, and Zakary Tormala, of Stanford business school, three psychologists. By restating the rumours, Coke helps to propagate them. Its web page is a magnet for search engines. And people who read rebuttals tend to forget the denial and remember only the rumour, says Mr Rucker.”

The article referred to an ongoing struggle The Coca-Cola Company faces in the Middle East, where “For example, some people believe that if you read Coke’s Arabic logo backward, it says: “No Muhammad, No Mecca,” according to the article. I can read Arabic (at a kindergarten level).  It says no such thing.

I can read Arabic (at a kindergarten level).  It says no such thing.

According to SEOmoz’s link tracking tool, Open Site Explorer, Target’s veteran site has a page authority of 45 on a scale of 100 and just 50 inbound links – the majority of which are from other Target sites that cross-link to the veteran’s site.  Just one link among the first 26 came from an outside domain – an AM news talk radio station.

Coca-Cola’s crisis page has a higher authority ranking at 54, but with a similar breakdown of inbound links – the first five stem from other Coca-Cola sites. Recall that Coke’s page ranks first in search and this is likely because the organization, by virtue of its page,  has been successful in obtaining other inbound links including a story from Forbes, and longtime PR pub, The Bulldog Reporter.

These pages have a number of practical applications for crisis communications. In the short term, it’s a place to both communicate directly with interested market segments – including reporters, investors and consumers.  In the long run, these sites attract links or votes of confidence on the web that slow or stop (potential) future crisis that these companies may not even be aware are taking root.

These votes include your own company’s links – and they can weigh heavily.

Both Target and Coke hold top search spots for keywords related to their respective crisis cases and cross-linking tactics. Despite what the academics say, I tend to believe in Lanny Davis’ school of thought, “Tell It Early, Tell It All, Tell It Yourself.”

“Three hundred years ago news traveled by word of mouth or letter, and circulated in taverns and coffee houses in the form...