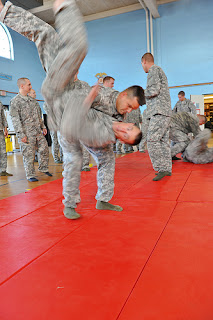 If there’s an argument for a company enabling its employees to get involved in social media, one sound argument is that you have an army of volunteers to help the organization tell its story, respond to customers and prospects and generally represent the organization.
The National Guard is no exception, except it has both Army and Air assets.  The National Guard is a reserve component of the Army and Air Force, which likes the Army Reserve and Air Force Reserve, has a part-time commitment for most members.  Training and standards are essentially the same as their active duty and reserve counterparts, the main difference lies in the fact that the National Guard also has a dual mission: it supports all 54 states and territories.
For example, when the governor of a state needs resources to help in a natural disaster, such as Hurricane Katrina, they have at their disposal soldiers and airmen (or airwomen) of the National Guard to help respond. In addition, more than a quarter million National Guard personnel have been deployed overseas since 9/11 according to figures from the National Guard Association, a lobbying group.

Mike Schaffer, director of social media with IOStudio, represents the National Guard Bureau – the administrative headquarters for some 300,000+ National Guard personnel – and helps to champion its social media efforts in support of recruiting.  Social media piques my interest from a PR standpoint in my fulltime work, but as a member of the Army National Guard and a company commander, the subject is of great interest to me from a recruiting and retention standpoint.
Tonight, I caught up with Mike at a DC Flacks MeetUp event to ask him a little more about the program he supports.  His thoughts are recorded in this YouTube video:
It’s important to point out that Mike has noted out in prior conversations that the people responding to questions on social media are bona fide Guard personnel – a real social media army, or so to speak – serving in a volunteer capacity.   Keep up the great work, Mike, your counsel and leadership is surely making a difference felt at the company level. You can find some photos of my soldiers getting First Aid and Combatives Training by my good friend Jeremy Lafreniere on Maryland Guard Flickr site.
Find the National Guard on these social media sites.
Facebook: https://www.facebook.com/nationalguard
Twitter: https://twitter.com/nationalguard
Web site: https://www.nationalguard.com/
If you enjoyed this post, you might also like:
DC Flacks: Growing like Fight Club for PR pros
Google, Groupon, enemies and inflation
Photo credit:  Flickr:  Maryland National Gaurd
WMEVFBJCG83J
Tweet
Share
Pin
Share
Share

Crisis communications professionals everywhere just had their world upended:  The Economist just may well have put you out of work...