Home > PR > The Economist and PR: Stereotypes and Reflections

The Economist and PR: Stereotypes and Reflections

That’s a summary of my reaction to The Economist’s article in the special Christmas section entitled: Rise of the image men.  It’s a short history of PR.  It’s a review of current trends.  It’s a high-brow hack job, from an otherwise reputable publication, that continues to succeed in an era where it’s brethren weekly news analysis magazines Stateside, have had less luck.

Regular readers know The Economist has a different approach to journalism:  They have no bylines, it favors fact-based opinion — but opinion nonetheless — even in reporting hard news, over objectivism; and it offers what many American publications do not:  a world view.
The images associated with the print and digital editions speak volumes, in a way words cannot describe, as to the outlet’s views on PR.  A “superclean PR Kit” complete with a toothpaste tube labeled “Reputation Whitener” greet the reader on page 126.  A polished man, in a conservative suit, is putting a handsome and youthful face mask over his unattractive face on the next page. A wolf in sheep clothing slinks across the bottom of the article’s third and final page.

These are images of judgment.  Ironically, perhaps intentionally, these images suggest to  the image man himself – that is the industry – is in dire need of improved relations with the public. Unfortunately, some of the brightest minds in our industry quibble over parties, who coined what term first, and who is selling out, rather than as PRSA would suggest, advancing the profession.

A handful of PR influencers have even begun to distance themselves from the term “public relations” in favor of associating with social media because it’s easier to get into the executive suite. To paraphrase the revolutionist, Ben Franklin, surely we’ll all hang separately if we don’t hang together.

Despite the fact the article is riddled with stereotype and innuendo, that The Economist peered down its spectacles and covered the industry of PR is recognition of the industry’s maturity, its viability and the business need.  I am certain I once read in O’Dwyer’s, a PR industry trade publication that The New York Times refuses to cover PR because it doesn’t recognize that the $10 billion industry is in fact an industry.  My searches tonight for that reference to provide a link for this post proved fruitless.

The Times has however, from my perspective, willingly “cast PR professionals as flip-flopping, candy chewing flacks that “whisper in the ears” of the elite or influential amid a changing media landscape.”  It’s recognition, albeit begrudging, but recognition.  It underscores my assertion that the PR industry is in need of some of its own counsel.

While my mental NLP engine would tone this article negative, it does hit on a number of trends and topics of significance to the industry:
What is public relations? It’s a question long asked.  Google returns more than 80 million results in response to this search query.  PRSA, the largest professional organization for the industry in the United States, defines the discipline officially “Public relations helps an organization and its publics adapt mutually to each other.”  It’s a definition I believe simply leads to more questions, and invites news organizations like The Economist to write, “Yet, after a century of spinning, PR Man remains uncertain of his proper role. Is he a master manipulator? Is he the devil’s advocate (as long as Satan pays his fees)? Or is he a benign bridge-builder between the corporate world and the public?”

The industry needs a simplified and more articulate definition of our profession.

Ethics in PR.  The Economist says Ivy Lee, an oft cited founding father of PR preferred relativism over truth, or in the words of the publication, “Verisimilitude mattered more than veracity.”  On their own pages, The Economist is the decider, but the alliteration of Latin root words is not lost on names like Jayson Blair.  If The Economist will peer back as far as the turn of the century for muck to rake, it’s fair enough of me to cite circa 2003.  Whichever side your profession falls on, without integrity, you have nothing.

The business case for PR.  “Lee noted how the emerging mass media were acting as the conduit for the anti-capitalist message of Progressivism, the liberalising reform movement that peaked in America in the early 20th century,” reads the article.  “He realised not only that it was essential for businesses to counter this message, but that the same conduit could be used to spread pro-business sentiment.”  If I didn’t read The Economist every week, the idea that the publication is in fact itself pro-business may have been lost. In fact, its very brand is the study of capitalism.  The perennial, if not ethereal, big business is an easy target of opportunity. Universally applying a coal mine standard to every corporation is about as rational of an argument as labeling every journalist by the actions of the aforementioned Blair. Businesses can and should advocate for their causes.  The alternative – silently waiting for discovery – has a smaller probability of being heard than the castaway’s message in a bottle.  Business innovation solves real problems.  We’ve built a country on this idea.

Dynamics of the industry. “Lee observed that the rise of national newspaper chains and syndicated journalism in America since the 1880s, combined with the extension of the franchise, had profoundly changed society.” Indeed and it’s happening again through social media.

PR-reporter relationships. “Ever since Lee’s first spats with cynical hacks, public-relations officers have been locked in an antagonistic, symbiotic relationship with journalists, with mutual contempt tempered by mutual dependency.” Must they be antagonistic?
A seat at the strategy table.  “Some cite firms such as IBM and Diageo (a drinks giant) where PR men have won seats at the executive top table. Such optimists—the industry is full of them, of course—now spy a rare opportunity to steal a march on the Mad Men of advertising and the flipchart-wielders of marketing. In the chaotic online world of social networking, they argue, their talents are much more relevant than their rivals’.”  This is not fiction, but a very real trend – as Advertising Age wrote last year, PR is moving central in marketing. I’d ask The Economist to fact check the brand name of the publication that espoused such an idea.

Advertising vs. PR.  Which is better advertising or PR? “They have also fought for influence within big corporations against their great rivals in the marketing and advertising departments.” The Economist, like many, is chasing the wrong question.  It’s not about which discipline is better – each has merits – it’s about how they work together.

Who owns social media?  “Here’s their [the image man] spiel: the mainstream media—the traditional gatekeepers of news and the bane of the PR man’s life—are becoming less important. So is the worth of the advertising slots they sell, and therefore so are the sort of paid-for, hard-sell campaigns that the ad men and marketers deal in. Meanwhile social networking, with its cacophony of bloggers, Facebookers and tweeters, is becoming more influential. It is also confusing and hard to control. The public is becoming deafened and confused by a barrage of contradictory messages.”  The Economist gets this completely wrong. Surely that’s a spiel, but it’s not coming from the PR industry.  PR’s case is about trust.  It’s about working with editorial contacts.  It’s a rejection of commercialization.  It’s about compelling content and less hype.

If there’s a positive perspective on this article, it’s my sincere hope that it will result in some industry soul searching.  That a common enemy – misperception – will unite the industry and sound a call to action to forgo egos and address every notion in this article line by line. I hope to see many, many blogs on this article.

PRSAY: Merely ‘Image Men’? Hardly
A PR Guy’s Musings: Digital PR in The Economist
Firm Voice: A Reply to The Economist (Council of PR Firms)
Drew B’s Take on PR: The future of PR, according to The Economist (it’s not pretty)
In Focus:  In Focus: The Economist burns the entire PR industry. Hmmm…
O’Dwyer: Economist Reveals Ignorance of PR
PRNewser: ‘Economist’ Doesn’t Paint a Pretty Picture of PR
the ever curious PR guy: The Economist magazine misrepresents PR folks, and the magazine is right
Fast Company: The Rise of B2B PR (FC blogger @wendymarx)
Flack’s Revenge: Battling PR’s Image Problem
Spin Sucks: The (Wrong) Image of the PR Industry
Matter Communications: I’d find it hard to believe that all journalists feel this way…

According to this Tweet, by @Wadds, while The Economist bashes PR, they also buy PR services.  Given The Economist’s comment “as long as Satan pays his fees” does this mean that The Economist is calling itself “Satan?”  @Wadds posted this blog post on the article.  @mpwatson also appears to be employed by @Wadds and made his own post to Twitter. 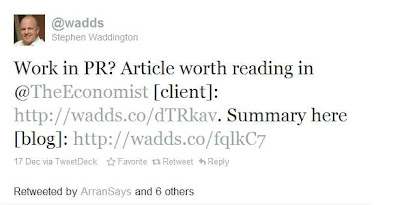 Update 3 (12/22.10):
Marketing-Interactive.com: The Economist Hires Edelman For PR Push
Despite this fact, I still hope to see Richard write a rebuttal on 6 a.m.

When PR pros get pitches

If there’s a unique aspect to what social media has changed, it’s that PR pros sometimes find themselves getting a...