Public Relations 2010: The Year in Search 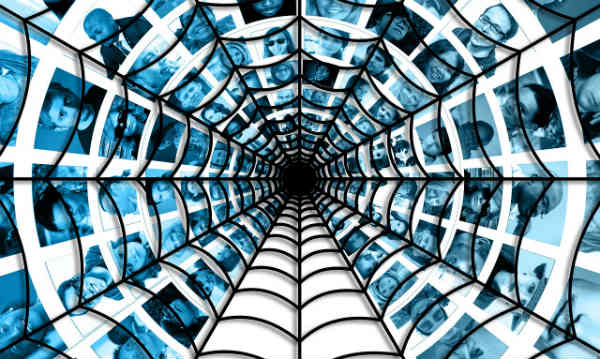 Search is an important element for any public relations practitioner. SEOs have a long noted that search and social media go together, and now that Google has launched social search, we’re beginning to understand how much of an impact social media will have on search results.

Using Google Insights and Yahoo! Clues, here’s a look at “public relations” in 2010 – a year in search.

2) Trends.It appears that searches for “public relations” were higher earlier in the year than later as search volume has fallen slightly as we close the year.

3) Geographic rankings.It’s interesting that Africa ranks so high.  In fact, the top four search locations for “public relations” are all countries in Africa.  The United States ranks fifth.  Hong Kong ranks 8th and it might be noteworthy to point out this is the only city in the top 10 list — every other entry is by country and leaves me to wonder how China stacks up.

4) Related searches. Jobs or some variation of “jobs” ranks high for related searches. So too does the “definition of public relations” which speaks to the continuous education process the industry faces. “International public relations” ranks high, which makes sense given the diversity of geographies noted in #3.  On the right side, note the “rising searches” category.  BP tops the charts, and Toyota ranks second — both companies faces major crisis communications challenges this year.  Apple ranks fourth, which is logical given the high-profile launch of its iPad earlier this year.  “Command public relations” ranks high — and since the term has little meaning for me, I drilled down a bit to understand the reference.

Turns out, the term “command public relations” is getting its search juice from The Spin Crowd, a show about doing Hollywood PR.  The screen shot below is a great example of “blended search” where Google provides a blend of search results from Web, news, image and social search. 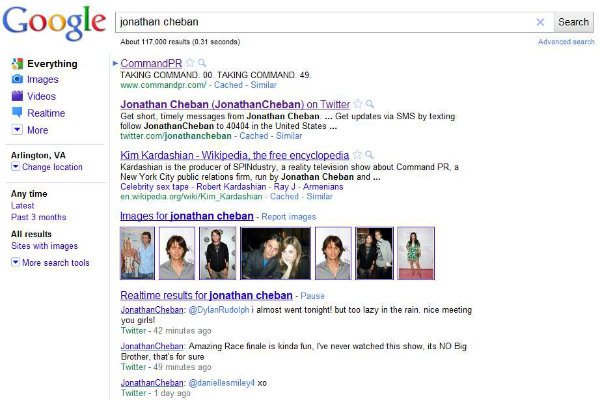 The show features characters who  have a real firm, Command PR, which is earning Google’s love (and I’ve just added to that love with that link), and starring Jonathan Cheban, who incidentally has 130,000+ followers on Twitter (does that make him influential or popular?).   The New York Post’s TV Critic, Linda Stasi was scathing in her review…which also ranks well in search as noted below — the top spot for “What on earth is The Spin Crowd.”

5) Yahoo Clues.Yahoo has provided a new tool for obtaining demographics about who is searching for what.  Unfortunately, the tool only allows for 30 days worth of data and it’s limited to the U.S. only, whereas Google Insights is global. 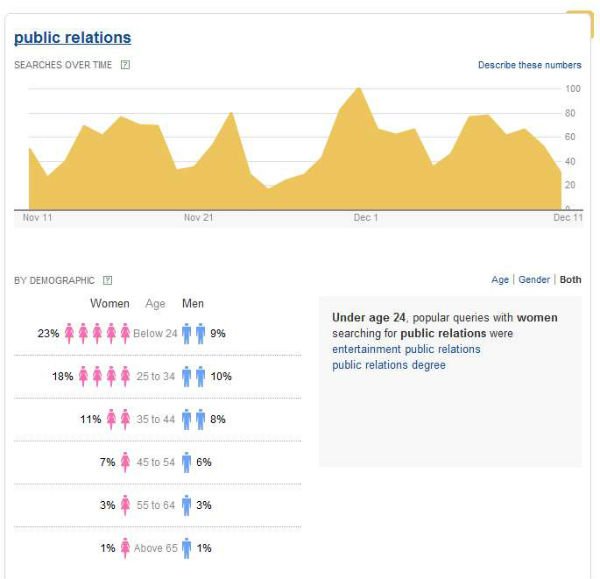 6)  Search demographics by income level.  This is interesting data to compare with the PRWeek annual salary survey.

7) Search demographics.  Georgia still tops the rankings.  This means Georgia has topped the charts for about 60 days. As the screenshot below indicates, New York ranks third.

I once recall that Harvard guru Rosabeth Moss Kantor wrote the best business leaders are not students of business, but...