I once recall that Harvard guru Rosabeth Moss Kantor wrote the best business leaders are not students of business, but students of history, because they view things in context.  What a year 2010 has been for PR — it’s hard to believe it’s almost over.   Looking back, even as we look forward, here’s 15 of the PR and social media stories that stood out for me in 2010.


1.  Digg hits the Oregon Trail.  Digg launched its new site.  It also gave us the oxen-drawn wagon version of a Twitter fail whale.

2.  Lady Gaga gets political.  Pop star is no longer just popular…she’s political: she challenged a U.S. Senator on Twitter over the military’s Don’t Ask, Don’t Tell policy. And she did it from a Blackberry.

3.  BP earns unowned media. @BPGlobalPR, with its bent for sarcasm, attracts 180,000 followers as BP’s crisis in the Gulf unfolds.  Add that little inconvenience to CNN’s Anderson Cooper‘s wrath and you’ve got a case study that will replace Exxon in the PR textbooks. The steely blue-eyed anchor pounded BP night after night with such disdain he might just have edged out Bill O’Reilly as the angriest TV personality…for a few months.

4.  Yahoo proposes to Bing.  Yahoo put a ring on Bing after a long, hard and lonely time in the search market.  Bing is a good looking lady, and rolled out some very sleek options for perusing multimedia.  Meanwhile, Google, which considered a Groupon fling, remains the perpetual bachelor.  Simultaneously we hear Microsoft is pimping itself in Bing videos.  My calls to Steve Ballmer’s personal cell phone were not returned for comment on this blog post.

5.  Search and social get married.  If you missed this one, it’s pretty big.  Social links count in search to the extent, my SEO colleagues at work often send me instructive notes about how links should structured in social media. If you are a PR pro and you still haven’t taken time to understand SEO, you’re really going to be hurting next year.  While I’ve got some of the basics down, this stuff can get pretty complex, so it’s important to read up.  The bottom line: it’s important — find people who can help.  As @LeeOdden says: Search + Social = Better ROI. (Disclosure:  Lee Odden’s firm TopRank is a consultancy my employer retains. They are smart people, I’m glad to have their help).

6.  Tiger Woods.  Shucks.  I don’t like this one.  Okay, he screwed up…I get it.  He deserves to be dumped. But the personal nature of it tears at me.  We’ve all been through a break up (that’s life) — maybe not like this one — but it’s tough enough without the constant strain of the paparazzi.  This doesn’t detract from the fact that it was one of the biggest stories — and PR themes — of 2010. There’s a lesson that can be learned from it — and that’s why I decided to include it.

7.  Vocus acquires HARO.  See Mashable.  As many know, I work for Vocus, but even so, as a PR pro, this was still pretty big news.   It was awesome to be part of this announcement. Six months later and I still see the occasional Tweet that reads, “Wow, Vocus acquired HARO, when did that happen?”  Psssst…did we mention HARO will remain free? 9.  Mad Men, Season 4.  Enough said.  Except that PR is getting it’s own non-reality show.
10.  Wave, goodbye, Google.  “Greater than the tread of mighty armies is an idea whose time has come,” said Victor Hugo. Well, Wave must have been ahead of its time because despite ingenious attempts at explaining it (see video below, which has more than a million views), most people didn’t get it.  Bloggers everywhere had fun with headlines like this one: Google waves goodbye.  I’m still holding out for Buzz, but admittedly, its not looking good!


11.  Anti-social media guru meme arrives.  Call it rage against the machine.  Sentiment soured against self-proclaimed social media gurus where a few high profile posts called for the social gurus to be trampled by elephants (screen shot below from this post). Then countermeasures were launched — the anti-anti social media guru agent was injected into the program.  Pixar Pictures is allegedly working on a movie script with an evil version of Shrek to take the lead role.  Six degrees of Kevin Bacon gurus say Jesse Eisenberg is interested in doing the voice over.  My money is on a Matrix-style Keanu Reeves.  Best line ever?  “Whoa!”  By the way, Jesse Eisenberg was in Roger Dodger with Elizabeth Berkley, who was in Any Given Sunday with Cameron Diaz, who was in Charlie’s Angels with Drew Barrymore, who was in Scream with Neve Campbell, who was in Wild Things with Kevin Bacon.  Okay, I cheated. 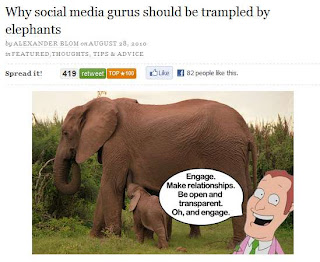 12.  Editor & Publisher Reloaded.  Former owner Nielsen shuttered the pub in 2009 after it couldn’t find a buyer.  The oldest journal covering the newspaper industry, its closure was the capstone of symbolism in a year that saw many publications fold.  Then in early 2010, publisher Duncan McIntosh saved the day and relaunched the site, though times are clearly still troubled.

13.  Apple launches the iPad.  Looking for best practices for a product launch — here’s what Apple can teach PR about product launches.  In the same year the iPod turned 10 (the very device that led to the company’s revival), it launched this clever device.  Editor & Publisher does not yet have an iPad app. 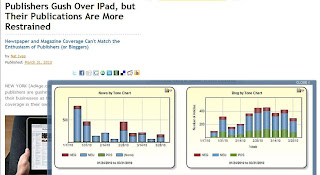 14.  WikiLeaks nightmare.  The WikiLeaks nightmare is the PR crisis case study we might never read about, though crisis guru Jonathan Bernstein takes a shot at it on the Huffngton Post.  However I’d expect that this crisis will be mitigated on the back channel — as it should.  By my inexact summation, the recent release of classified diplomatic cables has received far more attention in the mainstream press than the release of classified military documents a few months ago.  Why?  Cables are written in a journalistic fashion with clear, concise writing akin to the inverted pyramid format. Those documents — as depicted in the mainstream press — also profile world leaders, whose thoughts were only previously shared in private, but now are on the front page.  By contrast, I’d surmise that the military documents released previously, were probably filled with military jargon, and acronyms, that no one outside the military understands.  Further, the subjects of those reports are likely the antithesis of world leaders, but real people, enduring the real conditions of armed conflict. What does that say about America’s news content consumption?  In any case, I personally view this as a tragedy — one that puts real American lives at risk — and hope Julian Assange is extradited to the U.S. and put on trial for espionage. I bet Apple would rather do without the product placement in the photo op below.

15.  PR is the best career.  Hat tip to PRNewser’s Tonya Garcia for point out that U.S News wrote that “PR specialist is one of the best careers for 2011.”

Most read from Amplify and Posterous

I test out a lot of new tools and have spent several months experimenting with a couple other blogging platforms: ...