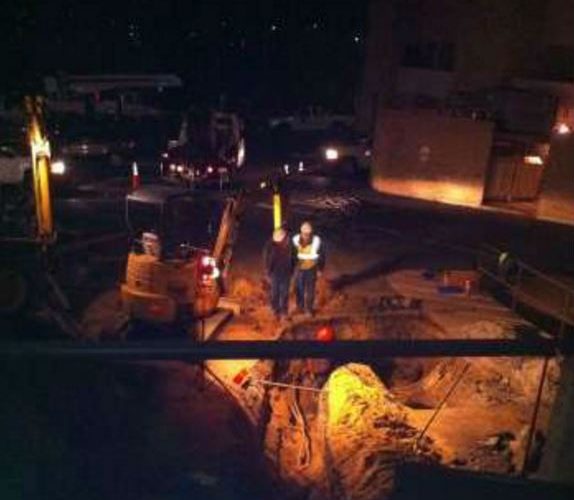 “Would you bother owning a telephone if you had no intention of answering it?” That’s the question I asked over the weekend to Dominion Power.  The social phone was ringing but Dominion wasn’t answering.

Four industrial-sized transformers, that feed power to about 400 condominium units housing roughly 1,000 people, blew out about 12:30 p.m. on Thanksgiving Day.  Power would not return until 5:00 p.m. three days later.  It was a period of time for which Dominion was all but silent, but perhaps a time, when they should have been talking the most.

Dominion’s automated help line sends customers into that dizzying cataclysm of the inhuman variety we’ve all come to detest.  All in response to a crisis that is quite essential.

For this building, without power, there is no cooking, no hot water, and no heat.  Anyone can make do with canned goods, but the heat is something people cannot do without.  Kids and senior citizens live in the building.

About 11 hours after I logged a complaint with Dominion’s automated telephone line, I received an automated call back that power would be restored at 8:00 a.m. the next morning.

This was about halfway through the outage and the message would prove inaccurate. It would be another 24 hours before power would be restored.  Even as I type these words, the fix is only temporary.  We may yet see another outage before this problem is completely remediated.

As the season turns colder, Dominion Power would do well to warm to this idea.  If last winter’s accumulation of snowfall is any indication, this is bound to happen again.  Moreover, as the year closes, we’re seeing social media adoption by average consumers increase dramatically. It’s an expectation.

Experience tells me Dominion is afraid to engage the public on Twitter.  They’d rather keep it hushed up, engagement means attracting attention to the story and more people would know about it.

You can discard those ideas – this is quite public.  A better approach would be to join the conversation, use the medium to deliver tips that are useful in a time of crisis communications, and help frame the issue with the air of calming confidence and penchant for customer service.

Yes, it might mean more headcount, but what’s the cost of abstinence? Especially for a company that audaciously raises electricity rates 18 percent as the nation plummets into a recession.

To understand the problem, I did what Dominion could not seem to do:  I talked to the crew.  I walked down to the site, found the guy that looked like he was in charge and asked some questions:  How bad is it?  How long before power will be restored?

It was at this moment I learned where Dominion had missed its opportunity:  I found hard working Americans, missing their own holiday, working tirelessly to troubleshoot and correct the issue.

The first night these men coordinated the delivery of new transformers – which are about the size of a midsized sedan – installed them and soon got some power back to about half the building.

Many of these men had been awake for 24 or more hours and working in an inhospitable climate.  So, at 6 a.m., I bought two giant boxes of coffee from a local coffee shop and a carton of Honey Buns and set them up at their work station. The foreman waved his thanks.

What would I advise Dominion Power to do differently?

Rest assured Dominion’s situation is not unique.  Any telephone, internet, cable, or similar utility service provider, with tens of thousands of customers, is in the same situation: vulnerable to nature, headlines and seething customers armed only with an iPhone that can be recharged in a vehicle.

I’m not a fan of “flame” posts, I don’t believe in doing them, as I usually find them obnoxious, self-serving, and I can empathize with a like-minded person surely sitting on the opposite side of a post like this.

However, this event literally struck home.  I took a day to cool off before writing this post and I’ve tried to be constructive in my comments, but would welcome your thoughts.

What advice would you give companies like Dominion? What criticism would you have for me?

Ergo Ego: Personal Brands and the Top 10 PR Whatever

by Frank Strong @DannyBrown isn't afraid to call it like he sees it and he doesn't shy from shock value....