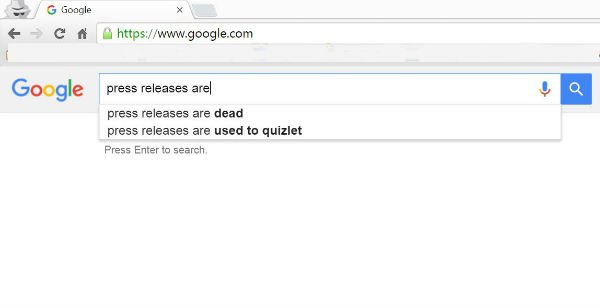 “If press releases are not dead, then what?” asked @sharisax.

Bill Sledzik, a professor at Kent State, started his response to that question by saying, “I first read about the death of the news release in 1979…”

Indeed, rumors the death of the press release have been greatly exaggerated.

How effective are press releases?

It depends.  What are you trying to accomplish?  PR professionals have an array of tools in their toolkits these days, the best bet is to use the right tool, or right combination of tools, for the job.  This is not the same question as, can press releases be effective?  To which my answer would be a resounding, “yes.”

This comes back to the goals of a press release.  Are you aiming for a news story?  Are you looking for search results? Is it for perception?

For example, few journalists will write a story about a new customer win, unless there’s something uncanny about the deal, but you can bet a prospect will search Google to check out your latest customer announcements.

Is there any way to show an ROI for press releases, especially regarding the costs of distribution?

Drew Kerr makes this point in this BNET article: The Real ROI of the Press Release.  Web-based distribution makes this incredibly easy, for example, you can see exactly how many people read your release — 5,000 reads used to be the same size as the circulation of some trade publications.  Except now the audience is yours.

There’s more to it than reads as you can also see engagement:  it can be measured in interactions, clicks, tweets, likes and even sales.

One small business owner in the southwestern United States tracked a release to a sales lead from a Dutch shipping company.  Another entrepreneur I spoke with, who maintains an e-commerce site, credits press releases with virtually every sale she’s ever made.  Ever.

This is absolutely astounding when you think about it.  A decade ago, we never imagined being able to report such definitive results.   This underscores the biggest change in the use of a press release, they aren’t just for the media anymore, but can be broadly incorporated into an overall marketing program.

How has PR practice changed in the last 2-3 years?

It’s been a gradual evolution over the last decade. And it finally hit a tipping point where a critical mass moved towards adoption.

Discussion boards, group-pages and listservs are considered old technology now, but they contain similar characteristics to that of social media. What’s changed recently is the easy-of-use, the interconnectedness and the velocity at which content can travel.

The net effect on PR has been significant, but here are a few that come to mind:

What changes will companies need to make in their PR and marketing strategies, given the growing influence of social media?

I believe there are a few key areas:

1. Communication objectives.  From a business perspective, the goal is sales.  How communication objectives supporting that goal needs to be continuously reevaluated. Is the coveted Wall Street Journal placement still the highlight of the PR team, or is it winning over that vocal antagonist on Twitter with a mere 20, albeit influential, followers?

This example is at extreme odds, because I know of no sales manager that would be unsatisfied with a mention in the WSJ, but it drives home the point we need to be thinking about:  what’s the impact?

2. Channels.  This is an important question because there are new channels being developed every day.  The conventional wisdom is to select channels after listening — engage your customers in their preferred format.  That’s sound advice to be sure, but there’s a second order effect to be considered:  Foursquare gets all the headlines today, but when was the last time FriendFeed made a blip on the news monitoring analytics chart?

None of these questions should prevent a PR professional from experimenting with new channels, but we’ll have to begin thinking about them like venture capitalists think of technology incubators.

3. Organization.  Resources are finite.  We cannot do it all.  Marketing, indeed companies, must consider the way in which they are task organized in order apply their resources where they are most effective.

Companies must be adaptive. This was a key point in Jim Collin’s book Good to Great.  The marketing and PR professionals that are most successful, will be those that readily tap new technologies, test, experiment and develop a culture of learning.  Learning must be an unquenchable thirst with the intellectually curiosity to ask what’s next?

Where will the press release, or indeed PR, be in 30 years?

What Sarah Palin can Teach Reporters about Social Media

Last year was tough on the media business. Dog bites man. Social media is a big part of the reason why this is...