What Apple’s iPad can Teach PR about Product Launches 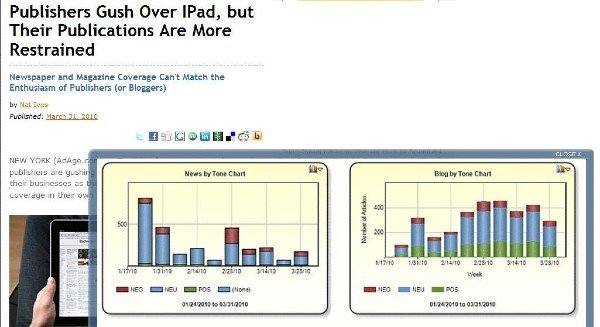 Apple’s iPad might provide a path for monetization for news on the Web. Or it might replace netbooks. Or it might solve world hunger. Lofty and uncertain goals for sure, but there’s one thing that is certain — it can teach PR pros a few lessons about product launches.

AdAge’s Nat Ives‘ piece – Publishers Gush Over iPad, but Their Publications Are More Restrained – places into some context what media and social media monitoring offers in terms of PR measurement, analysis and planning. 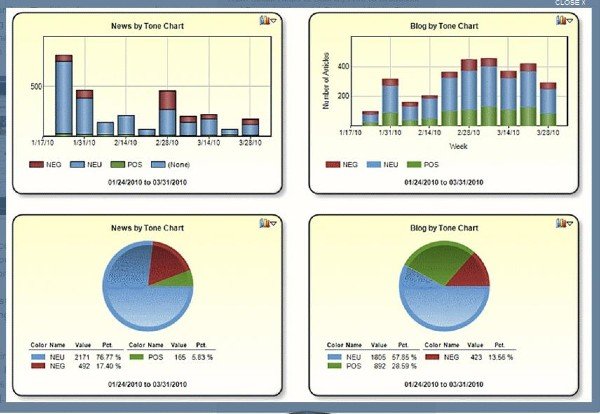 The screenshot (above) roughly gives us a snapshot of events:

You can build a reputation on what you are going to do –Apple made headlines without a product in stores. Circa 1999, this was called vaporware. The media and analyst community grew wary of reporting on products that were still in the process of being built, but clearly Apple has a track record of success and it’s new products do tend to border game-changing (i.e. iPod and iPhone): Ignoring the announcement isn’t an option.

If you consider blogs social media — which I do — then this analysis supports the idea that the majority of original reporting occurs in the traditional media, as this Pew study found.

Apple has managed to string out coverage — and a sizable amount — for a period of time that exceeds a fiscal quarter. Rather than a big flash and it’s over, Apple has nearly patented the process for obtaining consistent and steady coverage of it’s product launches — exactly what’s needed to build awareness and drive interest in the product.

Now that the product is out on the market, more and more reviews will be published and chatter will continue to grow. For example, Guy Kawasaki announced on Twitter today that he’s purchased his fourth iPad and at least one blogger has used the device to publish blog posts.

More apps will be developed, more tools will be announced and coverage of the iPad will shift from the launch to the utility. Expect to see long lines on the evening news around Christmas time.

If you enjoyed reading this, you might like the little project we did for Santa Claus during the last holiday season: Bulldog Reporter: Mainstream Media Still Matters. Oh, and Santa…I’d like an iPad for Christmas.

Disclosure: At the time of writing, I was the Director of PR for Vocus, the software company that performed the media monitoring analysis for the above-mentioned AdAge article.

Bob Tippee, the editor of the Oil & Gas Journal had some interesting, if not eloquent, things to say in an Advertising...