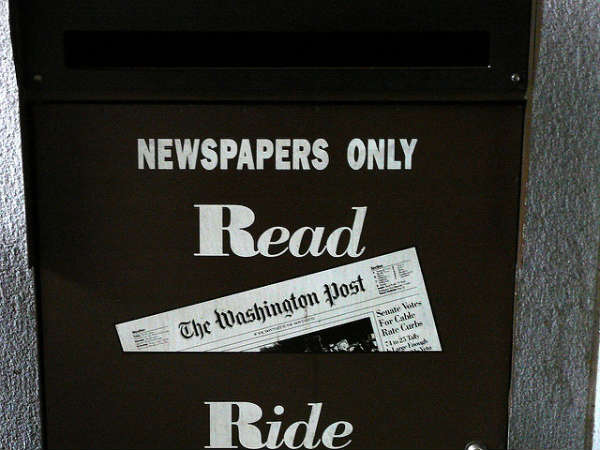 The Washington Post has a back story. It’s not political. It’s all business. Just don’t expect to read about it in the “B” section.

A decade after the dot-com rise and fall, a time when DC approached $2 billion in venture funding, we’re beginning to see a series of reminiscent news stories. Many of these focus on technology companies – those that made it – and some that didn’t.

A few stories however, focus on the ebb and flow of media outlets of the last decade. And maybe that makes sense: they are no longer around to tell about it.

The Post is famous, at least in local circles, for buying up competitors, like Techway, consolidating operations like Washtech.com, and trimming the staff responsible for developing business coverage. To the befuddlement of local businesses, the coverage it did produce, tended to focus on national news and has been, by my observation, augmented heavily by wire stories.

When the Post mashed the A and B section together about this time last year, a collective groan was audible from down the long stretch of the Dulles Corridor – a corridor, I might add, highlighted by a vibrant tech, venture capital and start-up community.

Local companies still care an awful lot about business coverage in, and by, their major daily hometown newspaper. And now there’s a new glimmer of hope as The Post has announced plans to launch a local business weekly: Capital Business.

While the new publication is an experiment of sorts, during a brief encounter with the editor Dan Beyers, he noted a minor detail about its A/B mash-up experiment that’s perhaps overlooked: when The Post combined the A and B sections the paper did not take a “hit.”

Did the A section, with its broader audience, that might otherwise be disinclined to crack open the B section, nudge readers to peruse business stories? Or was it, as Dan later told me by email, the result of “an extraordinary year for economic news and that fact undoubtedly led people to want to read stories in the business section.”

No doubt the shift in ad spending and declining circulation (almost 6% in 2009) has had an impact, though the Post may have found it’s footing. Further, the fact that the Post is hiring editorial staff with the time, focus and resources to produce in-depth local business coverage is encouraging.

The local business community is waiting with baited breath to get its Download of the first edition on April 19th.

In writing, the first rule of thumb is usually audience identification. That is to say the writer understands his or...