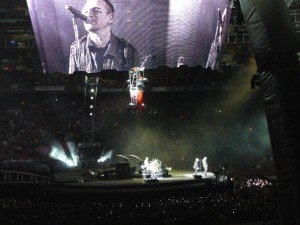 Photo: U2 with Bono on the big screen at FedEx Field.

“Adaptation is the process whereby a population becomes better suited to its habitat.” – Wikipedia

Adaptation was the theme of my last post for a blog panel that includes John Sidline, Krim Stephenson and Meredith L. Eaton. Adaptation was my answer to the question, “What was the biggest lesson for PR and marketing professionals in 2009?” This post focuses on the second of three questions: how will that shape our thinking in 2010.

Adaptation will shape PR in two key areas in the next twelve months with a renewed focus on process innovation and skills acquisition.

Process innovation. If 2009 was about experimenting with social media, PR will look for scale in 2010. For example the intimacy of a person becoming a “fan” on Facebook, and inviting a business to be part of their daily life via the news stream, will be viewed less like a channel and more like a program. Think of it as the next evolution in brand loyalty or rewards programs.

Even so, this is tactical, and in terms of process innovation PR should think in terms of the larger organization. We’ve already begun to see PR take a more central role in marketing, and is also overlapping with customer service, account management, support and even product management. Likewise, personnel in these traditional roles, are increasingly taking on PR duties — in a social media world, every employee wears a PR hat. Social media policies are just the beginning of the journey.

Skills acquisition. With the personnel cuts and hiring freezes, PR accomplished more with less in 2009. Now that it’s known this can be done, expect that trend to continue. Those decisively engaged in social media venues find that these networks never rest. Finely segmented audiences have a voracious appetite for new content and the need to optimize that content for search has made skills SEO requisite. The ability to grasp, assimilate and effectively use new skills is what PR maven Deirdre Breakenridge refers to as the “new hybrid professional” — a jack of all marketing trades and master of some.

For example, in 2010, we’ll see an increased demand for multimedia, especially Web-based video, if YouTube’s example as the second largest search engine is any indication. This will require skill sets in shooting, editing and producing creative video content quickly — and an understanding of what content will work best for any given theme.

Video will not be limited to the wired-Web, rather video for mobile platforms represents a brilliant opportunity. As John Sidline pointed out in his previous post for this blog panel discussion, more people have access to wireless devices than to any other medium.

We live in a time where economists have noted, information is plentiful and attention is scarce, and the need to provide credible content, in the preferred format, at the precise time will be pivotal. If we consider the long-held belief that 3rd party validation is more credible, user generated video content will have the greatest appeal. When you look across the standard marketing organization, no other professional is well suited to take on this task than PR.

Photo: The photo displayed here is exemplary because it demonstrates this concept. At a U2 concert held in September 2009, I was able to take photos, and record audio and video live from the concert — and post it to various social networking sites to share the experience with my friends. Later, I found Bono’s causes promoted during the event relevant to my work and was compelled to write a blog post on the topic. In a sense, I became a real-time brand advocate for U2 with little more than a wireless device.

Note: this is the second post in a series of three as part of a blog panel in an effort to gain a broad perspective on trends in PR for 2009, and what that means for 2010. My fellow panelists’ posts can be read here:

by Frank Strong What was the biggest lesson we – marketing & PR – learned in 2009? Adaptation. It’s fascinating...