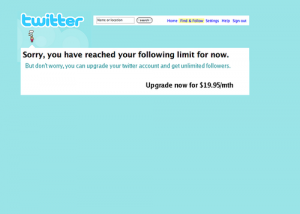 Twitter’s potential may seem limitless, but it surely has limits. Just wait until you hit the ostensible 2,000 mark in following. Or in some cases, it might even be fewer.

I monitor a handful of accounts, for work, for networking and for fun — and each account I attend to with diligence and personal attention. No auto-follows. No auto-replies. And for each person I choose to follow, I have reviewed their profile and Tweets and make a subjective determination as to whether or not following makes sense. That is until now.

Twitter has limited my ability — and doubtless countless others — to follow no more than an unspecified number of followers. Unspecified, because Twitter is anything but transparent in how it determines this limit, and clearly it makes exceptions.

More than a year ago, TechCrunch argued that, “For normal humans, though, there is really no need to follow more than a few hundred people.” [shudder!] Besides the fact, that I’d rather others not make that decision on my behalf, I’d disagree, for two good reasons.

First, I want to follow anyone that mentions my brand, company or cause online. That action sends a message: We’re listening and we’ll continue to listen.

Second, if you aren’t following, you can’t take a conversation “offline” using the direct message feature. To use that feature effectively, both parties must be following each other. Twitter’s obscure policy in effect limits the ability of users to capitalize on its functionality. That maybe good for scale, but it’s bad for PR, especially when the only means of arbitration a user has is a blog post.

Rapid growth is as exhilarating as it is challenging. According to it’s latest term sheet, it’s worth $1 billion, has 50 million in users and has booked a mere $4 million in advertising revenue. The more users, the more complaints…it’s almost inevitable and the resources added with new venture funding will never enough.

As a company, Twitter is quickly approaching a point where it will increasingly have to think hard, and in short time, about how it decides to apply resources. How long fans will continue to root for a company that feeds the perception it could care-less, is uncertain. One thing is for sure: the continuous service interruptions, lack of support, truant responsiveness and general apathy for transparency sow the seeds for competition.

This post here on what Google thinks of SEO and social media, and this post by PRNewser, which is about...