Home > PR > PR Lesson: A Picture’s Worth a Thousand Words

PR Lesson: A Picture’s Worth a Thousand Words 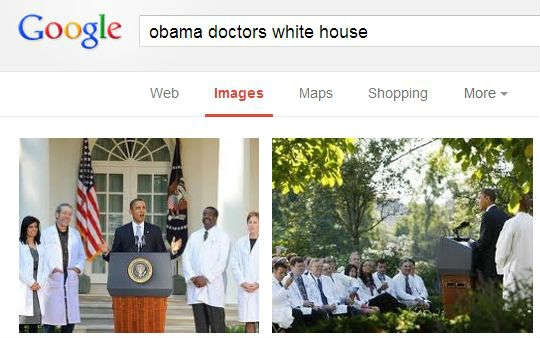 The White House’s communications staff has taken a beating over its move to attack Fox News. While it probably wasn’t smart, I’ve heard some commentators say it’s a brilliant strategy: making a big deal out of Fox keeps the real challenges of the day — like the stagnant unemployment numbers or the indecision with regards to Afghanistan — off the airwaves and out of ink.

Even so, the White House PR staff may have scored a small victory. The White House allegedly asked (ordered?) doctors attending photo opportunity in support of the Administration’s health care policy to wear white lab coats. What better image could there be for a President pursuing a health care policy than a hundred or so doctors, who clearly look like doctors, looking on adoringly as he takes the podium? Few, if any.

Some media and bloggers, mostly the kind that lean right, though not all, have run a story chiding the White House for a creative PR stunt. These outlets have also run accompanying lab coat images, or b-roll in the case of broadcast, over and over and over. The negative stories, with these images, nets out as helpful, not harmful.

What do you think people will remember? The story or the images? Yeah, the images and that’s the PR lesson.

This isn’t a new tactic. I recall a graduate school case study with very similar circumstances, where Reagan’s images were more powerful than the news stories attacking him. Ironically, the negative stories actually shored-up his support.

The point here isn’t to debate politics, polices, or even ethics — rather it’s to make a PR point. Agree with him or not, the President clearly believes in his policies, and his PR staff’s job is to get the message out in order to sway public opinion in his favor.

Attacking Fox News probably won’t help the Administration, but a photo opportunity just might. After all, a picture’s worth a thousand words.

by Frank Strong Once upon a time, we all wondered how Twitter might make money. My, oh my, how the seconds...